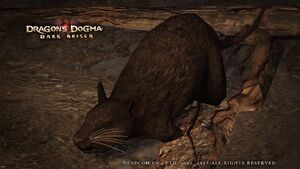 Giant Rat is an Enemy in Dragon's Dogma.

Giant Rats are larger versions of the much smaller mice. They are commonly found in groups inside small dark caves and similar areas. They are mildly aggressive towards the Arisen, and will bite if closely approached. They may be picked by the scruff of the neck and thrown to make squeaky sounds.

Usually found in caves or other dark places throughout Gransys and Bitterblack Isle. A harmless variety can be found in The Arisen's Refuge.

As Fauna Giant Rats take 2.5x more damage than might be expected.

Retrieved from "https://dragonsdogma.fandom.com/wiki/Giant_Rat?oldid=318218"
Community content is available under CC-BY-SA unless otherwise noted.