Frostwyrms are a more powerful subspecies of Wyrms that can be found on Bitterblack Isle.

Like Wyrms, Frostwyrms rely on spellcasting for their favored attack. The primary threat comes from their ability to cast even the highest order of spells extremely quickly and consecutively, often leading to a barrage of magickal attacks that will overwhelm anyone that cannot consistently avoid them. This combined with the rare ability to heal itself makes it one of the toughest enemies in Bitterblack Isle, especially when they are encountered unexpectedly or in groups, particularly when paired with a second Frostwyrm.

Defeating a Frostwyrm provides a chance of Dragonforging any Weapons or Armor that are equipped on the Arisen. Unlike the regular Wyrm, this also includes gear that has not been Enhanced.

Frostwyrms are encased in an icy aura that deals some damage to those climbing it or within melee range and can eventually freeze climbers solid.

The Frostwyrm's defense is not particularly strong when compared to its draconian cousins, making it comparatively easier to kill with direct physical damage. 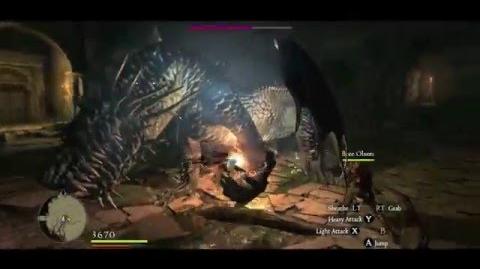 Mystic Knight vs 2 Frostwyrms
Without a Golden weapon to inflict Silence on the 2 Frostwyrms, this Arisen relies on speed and power to overwhelm the dragons and prevent them from spellcasting. Abyssal Anguish and Flame Riposte are used to take down this dragon team. (Hard mode) 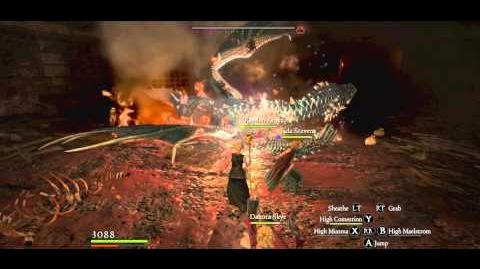 Frostwyrm slain with Golden archistaff D, Arisen undamaged.
Silence the Frostwyrm with Silentium or a Rarified Golden Weapon to disable its spells. Any spell from a Golden staff/archistaff can inflict Silence. Equipping Barbed Nails with the Emphasis augment help stagger the dragon and intercept its roar. (Hard mode with Stability augment. Zero Dragon roars and pawn revivals) 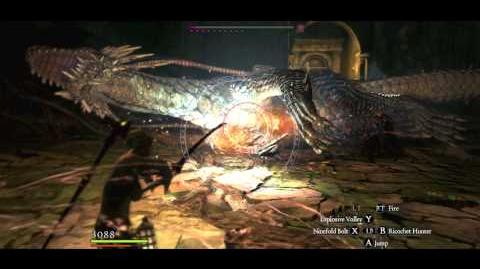 2 Frostwyrms vs Magick Archer, Arisen undamaged, Hard mode
Use a Rarified Golden Weapon to inflict Silence on each respective Frostwyrm, then focus on each one in turn. Aim Explosive Volleys at their hearts and let pawns detonate them with strikes (or strike them with Cutting Wind). Anticipate the Frostwyrm tail whips, their only real offense once they are Silenced. Remember that Dragonkin always fall onto their right side when they collapse onto the ground. Position the Arisen for heart strikes when they topple over. The only damage sustained was due to proximity to the Frostwyrm's icy heart. 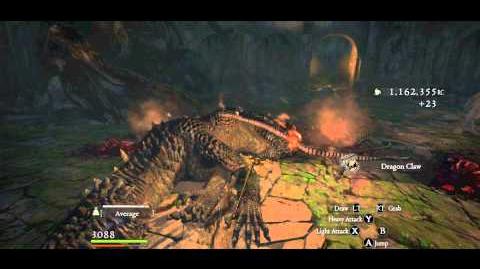