Fracture Dart is a fire based skill available in Dragon's Dogma.

"An advanced form of Splinter Dart. Sends up an explosive arrow that splits in mid-air, showering an even wider area with smaller missiles."

An advanced version of Splinter Dart.

Damage can consist of two components:

Damage from the arrow is relatively weak, similar to that of Loose - a direct hit is required for this arrow to damage - if it strikes it may inflict debilitations including Elemental Debilitations as well as minor magick damage if the bow is enchanted.

The secondary explosions constitute the major part of the damage 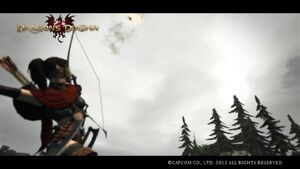 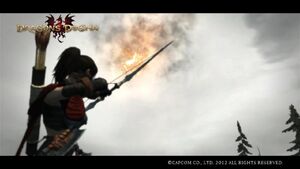 Add a photo to this gallery
Retrieved from "https://dragonsdogma.fandom.com/wiki/Fracture_Dart?oldid=315586"
Community content is available under CC-BY-SA unless otherwise noted.