The Pilgrim's Gauntlet
Fortress of Remembrance is a location in Dragon's Dogma: Dark Arisen.

The Fortress of Remembrance is a location on Bitterblack Isle. It is entered through the Corridor of Emptiness, has access to The Black Abbey, The Pilgrim's Gauntlet, and leads to Tower of Treasons Repaid (which provides access to the Forsaken Cathedral).

The locked gate to the Tower of Treasons Repaid can be opened with a Void Key found in The Pilgrim's Gauntlet.

There is a broken Riftstone on the First Level Underground which may be restored for 15,000 RC.

Death will make an appearance on the bridge near the Corridor of Emptiness during the Arisen's first visit, and may randomly re-appear on subsequent visits near the Tower of Treasons Repaid.

Also, a Maneater will lurk in a random chest.

Pre-Daimon the area will contain a Banshee and four Undead on the first floor bridge to Corridor of Emptiness; two Skeleton Brutes on the first floor after climbing a ladder on the way to The Pilgrim's Gauntlet; four Succubi near The Pilgrim's Gauntlet; an Eliminator in the tower with the Riftstone; and four Wargs near The Black Abbey. Giant Rats can also be found. Additionally, an Elder Ogre may randomly appear, either on the bridge to the Corridor of Emptiness or on the Fourth Level Underground next to chest #16. 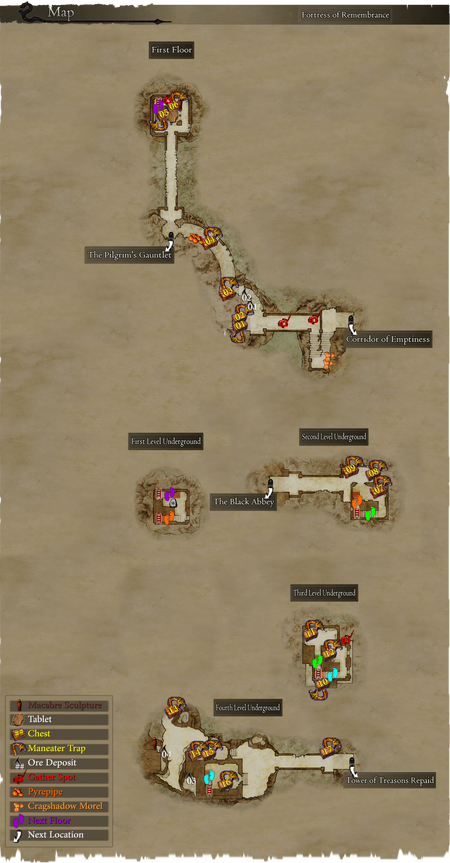 Two Macabre Sculptures and a tablet containing "Recollections of another Arisen" tablet are found in the Fortress.

On the upper level of the square tower, accessible only through a Succubi ride there is a Macabre Sculpture as well as a Bitterblack Gear Lv.2. Lower down the tower, on an outer balcony on the third level underground are two Coin Purse of Charity, and a Giant Coin Pouch can be obtained on the outside of the tower, accessed by exiting the tower on the 3rd level through the east window.

The second Macabre Sculpture is found at the lowest level (4th level under), on rocks underneath the entrance to the Black Abbey.

Refer to map for all chest locations.

"The dark grows more oppressive beyond"

"The halls are narrow, and their twists and turns confounding. Let us be cautious."

Retrieved from "https://dragonsdogma.fandom.com/wiki/Fortress_of_Remembrance?oldid=322505"
Community content is available under CC-BY-SA unless otherwise noted.