Corridor of the Hallowed

Forsaken Cathedral is a location in Dragon's Dogma: Dark Arisen.

The Forsaken Cathedral is an area on Bitterblack Isle. It is accessed from Tower of Treasons Repaid and leads to the Corridor of the Hallowed.

Here an encounter with the Dark Bishop and his Cursed Dragon takes place - these two foes must be defeated in order to travel any deeper into the dungeon.

Post-Daimon, the Arisen may just run past the Dark Bishop to unlock the shortcut to the Corridor of the Hallowed, defeating them is not required anymore. If the Arisen does slay the Dark Bishop and his Cursed Dragon, they will respawn after 5 - 7 days.

There is a broken Riftstone on the First Floor (in the room leading to the Dark Bishop) which may be restored for 15,000 RC.

Initially, foes in the area include a Golden Knight / Silver Knight pair, a horde of Undead, including two Poisoned Undead, four Giant Undead, several common Undead, a Banshee, as well as the Dark Bishop and his summon, a Cursed Dragon.

Post-Daimon there are Giant Rats, Wraiths, an Eliminator, five Pyre Saurians, a Goblin Shaman and three Giant Geo Saurians, that may be accompanied by an Elder Ogre (fourth floor).

A single Macabre Sculpture and two tablets containing "Recollections of another Arisen" can be found here.

Refer to map and table for chest locations and contents 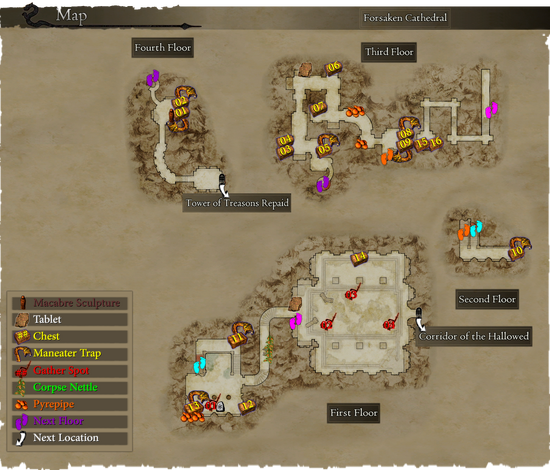 "We'll need of the best arms available if we hope to survive this place."

"The halls are narrow, and their twists and turns confounding. Let us be cautious."

"Be mindful of your pawns' health, in combat and in transit both."

Retrieved from "https://dragonsdogma.fandom.com/wiki/Forsaken_Cathedral?oldid=316111"
Community content is available under CC-BY-SA unless otherwise noted.