Foreign Knife is an item available in Dragon's Dogma.

"A deadly throwing knife introduced by the bandits of a foreign land."

Foreign Knives have two main uses: as a throwing weapon, and as a gift for soldiers to increase their affinity.

The Thrown Damage caused by a Foreign Knife is unusual (compared to other thrown weapons such as a Rock, or throwblast) in that it does slashing damage, and does not scale with the thrower's Strength. Additionally, unlike most other thrown objects, the damage is increased when Strength boosters such as Demon's Periapt are used. 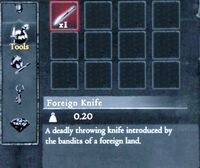 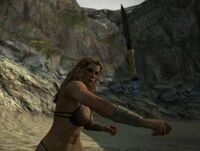 Add a photo to this gallery
Retrieved from "https://dragonsdogma.fandom.com/wiki/Foreign_Knife?oldid=282106"
Community content is available under CC-BY-SA unless otherwise noted.