Force Hatchet is a DLC weapon available in Dragon's Dogma.

"This scythe-like blade grows in power with each successive strike the wielder delivers without taking damage. However, at maximum power, being hit drops Stamina to 0."

Striking foes with the Force Hatchet (without the user being struck) gradually increases the wielder's physical attack power.

The power boost is lost if the user changes the primary weapon, gets struck by an enemy attack, uses a Ferrystone, or enters another map area (which requires loading).

There are a three stages of intensity of the attack power boost, indicated by a blue glow on the user's arms and upper body.

The intensity of the glow directly corresponds with the weapon's increase in attack power.

Upon reaching each higher stage of attack power, a distinct "chime" will sound.

Multiple strike skills such as Full Moon Slash or Sheltered Assault are effective for rapidly charging this weapon to full power. 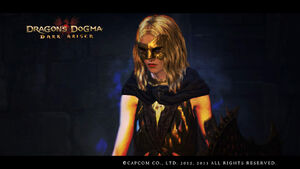 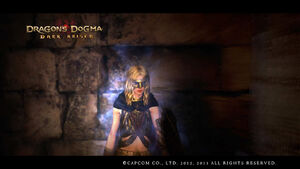 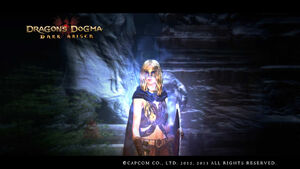 For an enemy with weak defences the first stage boosts damage only slightly; the second increases damage by a half, and the final stage at least doubles damage.

The damage from secondary weapons is also boosted:

eg A Mighty Bend to the eye of the Gazer removed 3/20 of a Health bar with 1617 Strength. A second shot, at the highest charge power removed around half (10/20) of a bar - more than doubling the damage output of the secondary weapon.

Magick power is not increased. Neither the magick power of weapons with enchantments, nor the spells from Magick Shields can benefit from Force Hatchet.

Retrieved from "https://dragonsdogma.fandom.com/wiki/Force_Hatchet?oldid=315223"
Community content is available under CC-BY-SA unless otherwise noted.