Sidequest
Floral Delivery is a quest available in Dragon's Dogma.

"The dragon’s visit left injury and sorrow in its wake. Gather medicinal flowers so that Benita might treat the wyrm’s victims."

Collect Sunbright and Moonglow for Benita so that she might make curatives for the wounded.

This quest becomes available immediately after Harbinger of Destruction.

The quest is given by Benita, who can be found just down the road from the home in which the Arisen first awakens, in a ruined building made into a makeshift hospital. There, she is busy tending to the wounds of those injured during the dragon's attack.

Accept her request to gather five Sunbright and one Moonglow. 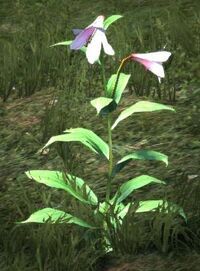 Sunbright can be found directly outside Cassardis at the Seabreeze Trail during daytime. The first large tree you see should have some Sunbright growing under it, as well as another tree further along. It is a bright pink flower and should be easily spotted. 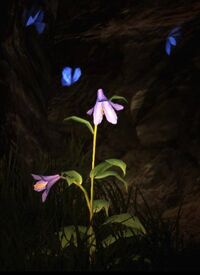 Moonglow only flowers at night, generally near water; no trace of it can be found during the day. It appears similar to Sunbright, but with a faint glow and butterflies circling it.

A single Moonglow can be found within Cassardis itself: head down the beach through a rock arch to Starfall Bay where you can find one near the water. More can be found far along the Unusual Beach on the rocks at the northern end, however this place may be fairly dangerous at night early on in the adventure.

Head back to Benita and submit the flowers to finish the quest.

Add a photo to this gallery
Retrieved from "https://dragonsdogma.fandom.com/wiki/Floral_Delivery?oldid=306338"
Community content is available under CC-BY-SA unless otherwise noted.