Start a Wiki
watch 01:13
Who is Fighter?
Do you like this video? 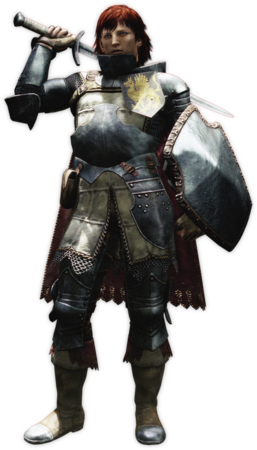 Fighter is a Basic Vocation in Dragon's Dogma.

"A melee specialist with attacks and counterattacks able to cut through any resistance."

Wielding a sword and shield, fighters stand in the fray of combat. Their primary role is group protection, drawing enemy attention away from the defensively inept pawns in your party while dishing out heavy damage. Fighters do not have any ranged abilities and are therefore forced into using their tactical wiles, pulling and taunting foes out of reach. They must bide their time until the perfect moment to strike. Fighters excel at ground combat and are a deadly class to be reckoned with.

A fighter's primary weapon is their Sword, always supported by a Shield. All of a fighter's skills rely on Strength to do damage. In terms of armor, generally Heavy Armor Sets are the most appropriate for a fighter, together with armored, padded, reinforced or chain underclothes. A custom fighter armor may leave the protected shield arm unarmoured, whilst protecting the sword hand.

Fighters are strong on offense and defense, but lack high mobility and ranged attacks. Whilst blocking with a shield their movement is slowed.

Skills in bold are unique to the Fighter.
Skills in italics can only be obtained via Skill Rings and Bands found in Dark Arisen.

The Equipment of the Fighter in the Change Vocation Menu is the standard Heavy Iron Armor Set :

The Equipment of the Dark Arisen Fighter is :

Retrieved from "https://dragonsdogma.fandom.com/wiki/Fighter?oldid=307308"
Community content is available under CC-BY-SA unless otherwise noted.