Explosive
Can be carried

Explosive Barrel is an environmental object found in Dragon's Dogma.

Explosive Barrels are wooden casks sealed with red tape found scattered throughout Gransys and on Bitterblack Isle.  These barrels cause an explosion when struck or thrown that inflicts physical and a small amount of fire damage on enemies together with a percussive effect that staggers or knockdowns all within range. Sometimes Gorecyclopes will pick them up to throw them at their targets.

These can be put to strategic use as Explosive Barrels do a lot more damage than their size would suggest, easily killing lesser Goblins, Undead and Skeletons and inflict a good amount of damage on larger foes. 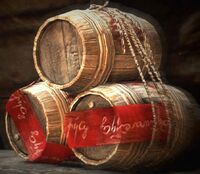 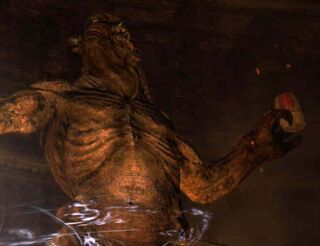 A Gorecyclops throwing an explosive barrel.
Add a photo to this gallery
Retrieved from "https://dragonsdogma.fandom.com/wiki/Explosive_Barrel?oldid=308004"
Community content is available under CC-BY-SA unless otherwise noted.