Evil Eye is an Enemy in Dragon's Dogma 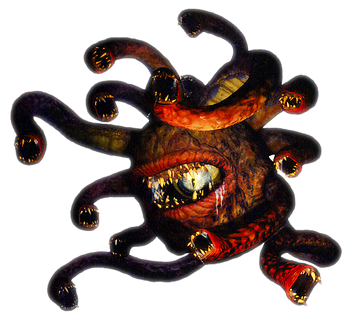 "The Dragon defeated by the Arisen in the past, used its remaining magic, injected into its eye, therefore created this magical creature"
―Dragon's Dogma Official Design Works, p.160

Evil Eyes are only found in The Everfall (Post-Dragon) and in the Rotunda of Dread (Bitterblack Isle). They are large and powerful spellcasters, formed from a fossilised dragon's eye. In addition to elemental spells Evil Eyes are also able to shift between dimensions, and summon Tentacles.

Evil Eyes resemble large floating eyeballs with protective "eyelids" that have teeth instead of eyelashes and are covered entirely in sentient tentacles that aid in both defense and offense.

They are oft found in association with Vile Eyes.

The Evil Eye can constantly transport Tentacles from its main body to the ground to attack the Arisen and their party. As long as the Evil Eye is alive it will continue to summon an infinite amount of Tentacles.

Areas that are filled with Tentacles though no Evil Eye is present should be exited immediately. Unless the main body is destroyed, Evil Eye Tentacles will continue to appear without end.

For more information, refer to the Bestiary page.

In addition to witnessing these techniques, it is necessary for Pawns to participate in killing 15 Evil Eyes either with their own Arisen or while travelling with others.

"What manner of foul creature..."
" 'Tis but one creature... Yet formidable one." (no Bestiary knowledge)
"It responds to powerful Archmagick with a sealing spell."
"We'll not break its barrier while the eye is open!"
"Its barrier falls while it eats!"
"The beast can negate our magick!"
"Attack when it closes its mouth!" 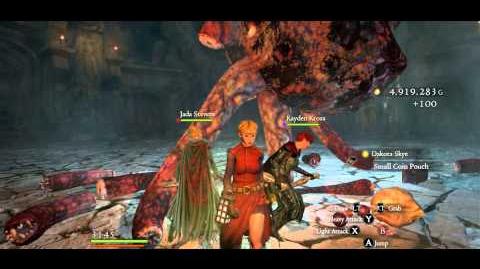 Chamber of Sorrow Evil Eye slain in 24 seconds (B1). Party undamaged, no buffs or curatives. Hard mode.-0
The Arisen is using only a White Hawk Talon sword in this demonstration. The Evil Eye must drop its shields in order to attack. Watch for it to begin spellcasting before initiating an assault. 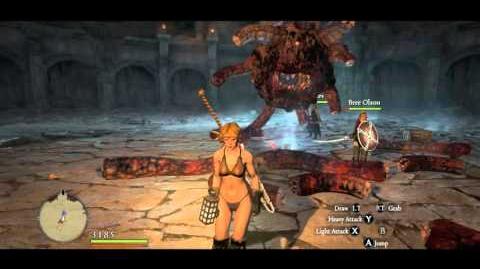 Warrior vs Evil Eye. Victory in 16 seconds, no damage.
A Warrior demonstrating the Evil Eye's vulnerability to high stagger attacks when its shields are down. When it initiates its debilitation gaze, stand underneath it and hack its dangling tentacles. Indomitable Lunge quickly finishes off the Evil Eye. Hard mode demonstration with no armor, buffs, curatives or Wakestones used. 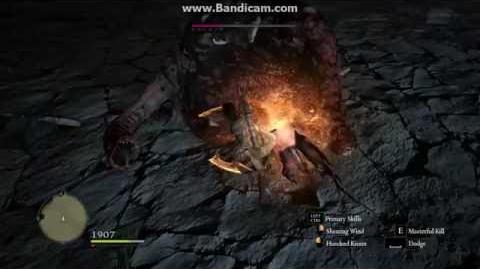 Retrieved from "https://dragonsdogma.fandom.com/wiki/Evil_Eye?oldid=317635"
Community content is available under CC-BY-SA unless otherwise noted.