Respected ruler of all Gransys. In his youth, he was dubbed a hero when he repelled the dragon. For that, he was also given the name Dragonsbane."

Duke Edmun Dragonsbane is the ruler of Gransys. Born into soldiery, in his youth he became an Arisen and set out together with a party of pawns to conquer a Dragon that had been terrorising the land.

Soon the threat from the Dragon was dispelled and Edmun returned to Gran Soren a hero, credited with its dispatch. Not long after, he was crowned Duke on the wave of approval arising from his deeds.

He then ruled Gransys for many years, seemingly aging little. Though he had many wives, he had no heir, and no family of his was known to be alive.

It was eventually revealed that Edmun had not actually slain a dragon, but in truth had accepted its bargain and sacrificed his beloved in exchange for power sufficient to sate any desire. With his own heart in the Dragon's safekeeping, he was granted almost perpetual life.

Much later, another Arisen from the little village of Cassardis set out and did defeat the Dragon.

Once the Dragon was defeated, Edmun's immortality was ended and he aged rapidly within seconds, gaining the many years he had lost, becoming a wrinkled and weakened old man.

Edmun wears a Set of Duke's Clothing, and carries a Crossed Cinquedea, though during Come to Court the Arisen is knighted with a Bastard Sword.

As the ageless Duke, Edmun is a formidable fighter. He has access to the Dragon's Maw attack and will use it. It is possible to slay Edmun either with a Maker's Finger or via Poisoning, though he is immune to a Maker's Finger if seated in his throne. He can be put to sleep, and blinded, but is immune to petrification. He is practically impervious to attacks, and can also arrest the Arisen.

On death an Inclination Elixir may be obtained.

As the aged Duke, he is much weaker, slowed and vulnerable to all debilitations (Blind, Tarred, Torpor, Poison, Lowered Strength), though even while blinded, the Duke can somehow still locate and strike the Arisen.

Originally just another soldier, one day Edmun awoke as an Arisen. Perhaps it was coincidence, perhaps fate, but just days later, a dragon attacked Gransys. Fulfilling his role as an Arisen, Edmun enlisted a number of pawns and set out to face the dragon. The epic battle that followed would be celebrated in song for generations to come, for unlike so many before him, Edmun triumphed over the wyrm. Slaying an evil dragon—in all of recorded history, there was only one other who had achieved this miraculous feat: the great unifier, Godking Leonart. Yet now, Edmun too had defeated a dragon. With everyone singing his praises, plus the support of the noble Gildas who had long been his ally, Edmun was propelled into the heart of government on an overwhelming wave of support.

A number of years passed. When the former duke fell ill and passed away childless, Edmun was selected as his successor. None contested his appointment to the position of duke for he was one of only two men to ever successfully complete a Wyrm Hunt. To refute him was to refute Leonart, the very father of their nation.

Having been appointed duke, Edmun took the name “Wyrmking” for himself. This title, a reminder of his victory over the dragon, was happily accepted by the people. Under the rule of Wyrmking Edmun, Gransys has seen a long period of peace and Edmun, with seemingly inexhaustible youth, remains hale and healthy to this day.
Edmun's Tale.[1]

Edmun's pawn is missing, and the whereabouts of his family are unknown. Though Fedel claims to be the Duke's nephew, according to Domenique, Fedel's wife, Fedel was previously a serving man in the employ of an uncle of the Duke.

According to Nettie, the Duke has had a "procession of wives", but yet lacks a living heir. His latest spouse is the young Aelinore, a princess from Meloire.

"Heed this well, Arisen: To challenge the dragon is to challenge Edmun Dragonsbane. It will not stand."

During Come to Court

"All through my reign, I foresaw the coming of this danger. And so I gathered men into armies, stones into strongholds. I readied for war. And then you, Arisen... You came to us, and the dragon with you. Pray, think on the meaning of that, and on your duty."
"Carry on in your endeavors for the duchy, Arisen. As long as you've the will to fight, I shall see you are granted the opportunity."
"If it is work you want, seek Aldous."

When arresting the Arisen

After receiving the Wurm Hunt License

"Duke Edmun Dragonsbane is a hero. He slew the wyrm a generation past."
"Beyond those gates lies the duke's castle, I'd warrant."
"Under his guidance, Gransys has known peace and prosperity."
"Even now, the people worship him as their savior."
"'Tis said he was named duke afore his cavalcade reached Gran Soren's gates."
"The pawns that fought alongside him must be about somewhere..."
"But where, this pawn cannot say."
"It seems no one knows just how he managed to defeat the beast."
"Bards the land over sing of his exploits...albeit in the broadest terms."

Edmun's pawn is never seen, nor does there seem to be any record of it. Furthermore, pawns are forbidden to enter the Demesne, which some interpret as suspicious, though most people of Gransys will also never be admitted to the Duke's close quarters. 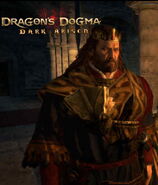