An Innocent Man
Dungeon is a location in Dragon's Dogma.

"Break any law, and you may find yourself arrested and imprisoned. You can't use items or change equipment in the castle dungeons, with few exceptions."
— In-game description

Located beneath the Duke's Demesne in Gran Soren. Any crimes the Arisen committed in Gran Soren are punished with time in the Dungeon, while pawns aren't allowed access.

There are two exits or entrances to the Dungeon - the official one - from the Duke's Demesne is barred by a gate until the quest Come to Court. A second secret exits leads to the Slums - this must be opened first from the Dungeon side.

There is a sewer exit to the Slums in one of the cells, via a windy passage through a broken wall.

There is a Skeleton Key in the chest next to where Ser Jakob stands. An Airtight Flask is lying on the floor of the first cell on the left, a Skeleton Key is needed to open this cell. Additionally, the cells contain some minor items, including a number of Shackles.

The sewer exit contains the usual detritus including numerous Skulls.

Committing a crime within Gran Soren will result in an inescapable visit to a locked cell in the Dungeon. For information on being released or escaping from being jailed in the dungeon - see Crimes 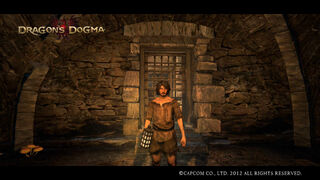 A prisoner in jail. 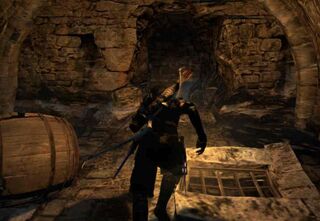 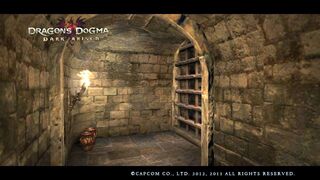 Gate to the upper Demense
Add a photo to this gallery
Retrieved from "https://dragonsdogma.fandom.com/wiki/Dungeon?oldid=317064"
Community content is available under CC-BY-SA unless otherwise noted.