Edmun Dragonsbane
Duke's Demesne is a location in Dragon's Dogma.

"When you visit the castle, your pawns will wait outside and rejoin you when you leave." — In-game description

The Duke's Demesne is the inner bailey and castle of Gran Soren, accessible via the Noble Quarter via a guarded portcullis. Only those of high status, special permission, or working in the castle may enter.

The Demesne consists of an outer courtyard, with gardens, surrounded by walls on three sides. In the center is the castle's keep, containing the royal chambers and audience room. The fourth side is open to the sea, and a single tower accessible by a walkway from the keep leads to the tower.

The Arisen is admitted to the Duke's Demesne on completing at least two Wyrm Hunt Quests from Ser Maximilian, and then accepting the quest Come to Court. Access is only permitted during daytime - entering the area at Night and getting caught by the guards may end with the Arisen in the Dungeon. Upon completion of the main quest A Warm Welcome during Post-Game, the Demesne becomes inaccessible.

The Bailey (or gardens) contains two formal gardens, one named the Duchess's Gardens, the other unnamed. Gardeners frequent this place, as do the nobility of the castle. The wall walks of the bailey are accessible via towers, named 'observation rooms', on the north and south sides, and there is also a small stone shed adjacent to the north wall with three chests.

High quality chests in each of the formal gardens contain periapts.

The central building in the Demense is the Keep, or Castle. It is the center of power in Gransys and contains the offices of the Chamberlaine, and the throne of the Duke.

The first (or ground floor) contains the Duke's Audience Chamber wherein he holds court from a throne. It is occupies two stories in the center of the keep with a gallery overlooking it from the second floor.

Also on the first floor are side chambers used by the castle's domestic staff, the Treasury, and the stairs down the Dungeon.

The second floor is accessed by a double staircase at the head of the Audience Chamber, it contains rooms used by important officials and staff, including the Chamberlain's Office, the Visitor's Chamber and Gathering Hall; a fourth room is used as a Store Room. At the west end is the Duke's Solar, the office of the Duke himself.

A small staircase leads up to the third floor and to the tower.

The only accessible part of the third floor leads, via an elevated walkway, to the Duchess's Bedchamber. At the head of the stairs down to the second is a ladder which gives access to the fourth floor.

The accessible part of the Fourth Floor includes part of the flat roof of the Keep - this is an unfrequented place that gives a good view over the north side of the palace gardens. There is a small side room here, used as a Guard Station.

Stairs from the ground room lead down to the Dungeon, where Ser Jakob is permanently stationed - here are four locked prison cells - a not so secret passage leads from one of the cells through sewers to the Slums - this route can only be unlocked from within the Demense, but once opened allows access to the Keep without passing the main gate.

The Royal Orders Quests are given by Aldous here. These are Griffin's Bane, and Trial and Tribulations; followed by Pride Before a Fall, and The Wyrmking's Ring; then finally Honor and Treachery, and Reward and Responsibility

On completion of theses quests one final quest Deny Salvation is given by the Duke.

A Warm Welcome tasks the Arisen to return to Gran Soren after The Final Battle and see if the Duke and the capital are safe.

There are numerous bags, crates, boxes, barrels, and chests throughout the Demense, as well as a large quantity of Ceramic Jugs, Trays and minor food items. Additionally a trawl of the worker's quarters and gardens will give a large haul of buckets, spades, brooms, and hoes. The upper areas of the keep may also have War Bugles.

There are a few notable spots of loot:

For planning burglaries, or secret meetings.. 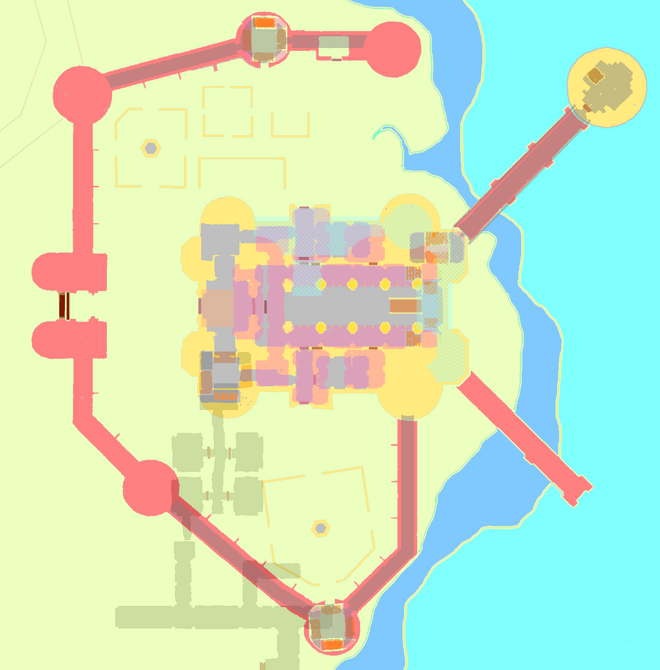 Retrieved from "https://dragonsdogma.fandom.com/wiki/Duke%27s_Demesne?oldid=323518"
Community content is available under CC-BY-SA unless otherwise noted.