Dripstone Cave is a location in Dragon's Dogma. Locations within the cave include the Emperor's Pillar, Station Room, and Brightwater Cove.

Dripstone Cave can be accessed by exploring the well located in Cassardis. It is infested with Giant Rats, Giant Bats and Saurians.

It is advised not to delve into the cave early in the game without the proper equipment, skills and curatives as Saurians have tough hides and will deal great damage to low-levelled parties.

The cave can be divided into several areas. From the Cassardis well entrance, the path splits. One leads straight and the other leads to an underground stream. The dry path is infested with Giant Rats. Both routes have a Giant Bat problem.

The main route is the straight path, which leads via a drop to a second area of the caverns, with a large rock formation called the Emperor's Pillar in its middle.

There is a water-filled cove off from the Emperor's Pillar room, initially blocked by a boulder. The cave beyond becomes accessible during the quest Deeper Trouble - it leads out to the sea somewhere at Brightwater Cove.

Once the Saurians have been cleared from the cave during Deeper Trouble, the rear cavern will be infested by Phantoms and Undead Warriors at night, and Bandits will be in the main cavern during the day.

A barred door leads to a short tunnel off to where the Station Room is located. Here either Bandits or Spiders lurk, occasionally only mice will run into the walls at the party's approach.

However, prematurely breaking the door's bar prevents pawns from obtaining one of the location knowledge stars for Dripstone Cave as they must enter the caverns from the Manamia Trail entrance and encounter the locked door.

Once the party has cleared out the cave of Saurians both times, it can be a useful shortcut for travellers making the trip between Gran Soren and Cassardis since there are few enemies, the walk is short, and the party will wind up right inside Cassardis.

The tunnels from the Cassardis well are full of Mushrooms, Large Mushrooms and Stagnant Shroom. In the main cavern Emperor's Pillar area, there is abundant Purple Anise and several Ore deposits - these are the only deposits in Gransys from which Sand-Layer Ore can be mined. The entire cave is a good source of Skulls, found scattered throughout. A side cave lit from a high water hole contains Grandgrapes, Mithridate and other plants.

Harspud Juice and other minor items may also be found. There are numerous fishing pools, but Giant Fish are absent or very rare.

"I hear running water from the right."
"This bridge is too far decayed to use."
"An animal carsass..."
" 'Twas the victim of a monster, most like."
"We'd best take care not to meet the same end." 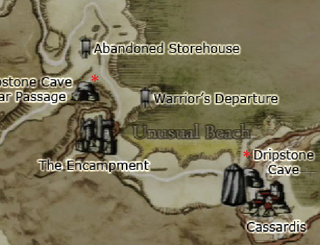