There are several species and kinds of Dragon. The Dragon (Grigori) that attacked Cassardis and took the Arisen's heart is a greater kind, probably unique in the world. Additionally there are lesser dragon species: the fire breathing Drake, the spell casting Wyrm, and the agile Wyvern.

In Dark Arisen on Bitterblack Isle further more powerful sub-species are to be found in addition to the minor species. These are the Firedrake, Frostwyrm, and Thunderwyvern, as well as the Cursed Dragon.

Finally the greatest Dragon known, the Ur-Dragon, exists beyond the world of Gransys, accessed via the rift. It may be the earliest or original dragon of all.

"Mind those fangs!"
"Mind those claws!"
"There! Its heart lies exposed!"
"Now, Master! Aim for its heart!"
"Quickly! The heart is unprotected!"
"Seems the heart alone is vulnerable."
"We must get at its heart!"
"Strike at its heart!"
"The heart, Arisen! Attack the heart!"
"Mind that tail!"
"We cannot reach it from the ground!"
"The wings, master! Strike it from the sky!"
"Aim for the wings!"
"Its wings may be vulnerable as well!"
"Let... go! Fiend!" (Pawn being grabbed)
"Gah! H-help me!" (Pawn being grabbed)
"Struggle as best you can!" (Arisen being grabbed)
"Aim for the head as it readies its breath!"
"Attack the head to create an opening!"
"Strip its wings and it cannot fly!"
"I'll strike its horn!" 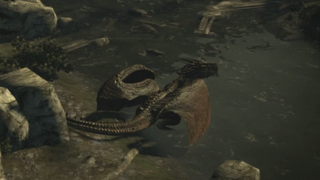 At the ford between Cursewood and Wilted Forest 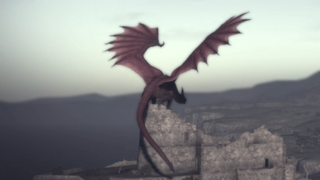 Retrieved from "https://dragonsdogma.fandom.com/wiki/Dragonkin?oldid=314193"
Community content is available under CC-BY-SA unless otherwise noted.