For the mask wearable as head armor, see Dragonroar.

Dragon Roar is a special skill unique to all Dragons, lesser and greater.

All Dragons have a powerful roar attack which may inflict Skill Stifling on the Arisen and instantly renders unconscious all Pawns within range.

Destroying the horns (Dragon Horn) or wings (Great Dragon Alula) causes Dragonkin to rear up and roar. Once the both horns and wings are destroyed a Dragon will roar without reason periodically.

The roar has a limited, yet long and wide, range so will always affect any Pawns in sight. Party members behind the Dragon may be unaffected.

The Cursed Dragon's roar is different in that it inflicts Possession on pawns. 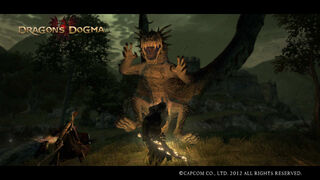 Wyvern Roar !
Add a photo to this gallery
Retrieved from "https://dragonsdogma.fandom.com/wiki/Dragon_Roar?oldid=313691"
Community content is available under CC-BY-SA unless otherwise noted.