Dragon's Spit is an item available in Dragon's Dogma.

"A combustible designed to envelop the area around the point of impact in flames."

When held, can be thrown at enemies causing Thrown Damage with a high likelihood to inflict burning. It can also be used to quickly mine ore at an Ore Deposit.

Dragon's Spit consists of an initial burst of flame that damage's anything it directly hits, followed by a modest fireball that can damage anything in a ~1m radius.

The initial blast is weaker, and if it connects with a tarred foe will have its damage doubled. The fire damage from the fireball is roughly twice as much again as the blast. 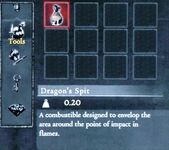 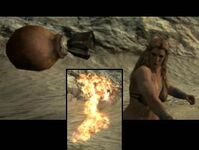 Throwing Dragon's Spit and the flame produced.
Retrieved from "https://dragonsdogma.fandom.com/wiki/Dragon%27s_Spit?oldid=316852"
Community content is available under CC-BY-SA unless otherwise noted.