Dragon's Dogma Quest is a spin-off game released by Capcom based on the original Dragon's Dogma. An iOS version was been released in Japan, end of 2013, followed by a PS Vita version.

In August 2014 Capcom announced support for the game was to end, with end of service scheduled for October 2014 (iOS) and January 2015 (PS Vita). A separate wiki has been dedicated to Dragon's Dogma Quest and provides further information on the game.

Dragon's Dogma Quest allows the control of Pawns who will be doing the fighting for the player. The Pawns will have over 300 vocations to choose from, that includes some of the original game's vocations such as the dual dagger-wielding Strider. Working through many various dungeons will require strategic movements to find the best paths. The action will be based on phases, and there will also be various traps and other gimmicks to look out for. Up to eight pawns can be added to a party for fights, who will cooperate together to take out tough foes. The game features an open-world map that allows for exploring and searching new areas. By walking into the shaded areas, new dungeons can be uncovered.[1]

The player Arisen travels with an active party of four pawns. Upon entering a dungeon, the Arisen has the option to hire an additional Arisen's party made up of four pawns. Players are also able to keep several 'spare' pawns in storage, the amount of which increases upon leveling up. Like in Dragon's Dogma, hiring a party of pawns will cost the player RC or Rift Crystals.

Each dungeon has a specific goal to be completed, ranging from simply collecting certain items to killing all monsters. There are also treasure chests to be found. Some treasure chests that offer better rewards require a specific class type of pawn to be present in the party to be opened. Others require pawns carrying a certain type of weapon to be opened, or are actually Maneaters.

The story is similar to the main Dragon's Dogma game: a Dragon appears and takes the heart of the main character without causing death, transforming him/her into an arisen. The Arisen commands a legion of pawns, who serve their master faithfully while he/she fulfills his/her eventual destiny with the Dragon. 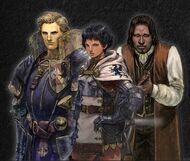 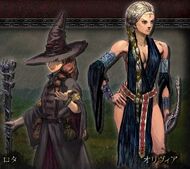 Retrieved from "https://dragonsdogma.fandom.com/wiki/Dragon%27s_Dogma_Quest?oldid=310296"
Community content is available under CC-BY-SA unless otherwise noted.