Discipline Points (or DCP) are stats in Dragon's Dogma. Discipline points are used to learn new Augments, Skills, and Vocations; and must be acquired to increase in Rank.

As players complete tasks, quests and hunt monsters in the fields, they gain Experience Points. A fraction of this gain is also given in Discipline Points.

Whilst experience points are automatically used when levelling, discipline points are manually spent on new skills, upgrades to skills, and new augments, as well as unlocking new vocations - they aren't tied to the vocation they were obtained as, and can carry across to be used to when developing as another class.

Discipline Points are gained based on the amount of Experience Points earned from a kill or quest.

In general, every time experience points are gained, a fraction of that quantity is also gained as discipline points - the relative amount is much higher for small increments of experience, meaning that the most efficient way to earn discipline is to defeat small creatures, and complete minor tasks.

Increased Experience Point growth such as from Weal items or other effects also increases Discipline gain. 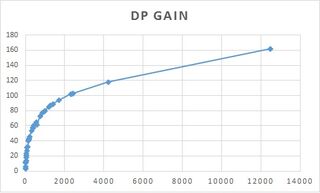 Graph of Discipline Points (Y-axis) vs. Experience Points (X-axis) Axes are not to same scale 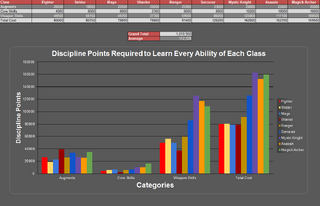 Created by NSA Administrator ~ please do not distribute without permission.
Add a photo to this gallery
Retrieved from "https://dragonsdogma.fandom.com/wiki/Discipline_Points?oldid=319989"
Community content is available under CC-BY-SA unless otherwise noted.