Devilfire Grove is a location in Dragon's Dogma.

Devilfire Grove is a wooded area in western Gransys, noted as the nesting place of a Drake.

It is located to the southeast of The Shadow Fort, west of Rest Camp, southwest of Lake Hardship, and north of the Verda Woodlands.

The grove is home to Goblins and Hobgoblins; whilst the path from the northern side between the Shadow Fort and Rest Camp north of the lake is inhabited by Saurians.

Plant life includes common Gransys species like the Thornflower in some parts - occasionally a rare Beech Branch may be gathered at a log.

"Look, Arisen -- a rope. Seems suspicious..."
"You don't see trees like this elsewhere."
"I daresay this road scarce sees civilian use."
"By the looks of it, 'tis a grand and sturdy fortress."
" 'Tis known as the Shadow Fort, built to ward against a goblin invasion."
"That's not a pleasant odor... Monsters must be near."
"What a splendid woodland, and so rich in resources."
"Look at these... Goblin tracks. They are troublesome in groups."
"The marsh grows deep at its centre, I should think. We'd best go around."
"We may be able to glean material from the boulders of this wood." 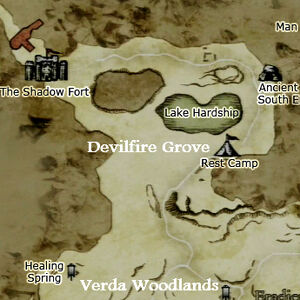 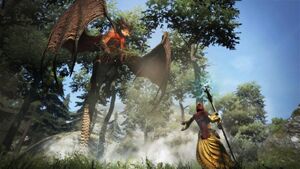 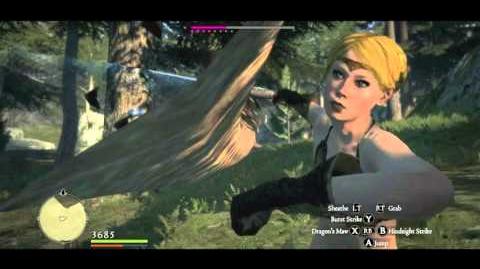 Solo Fighter vs Drake. One on one duel. No damage.
Drakes are weak against Ice enchanted weapons and spells (like Frigor). The Stability augment is equipped, rendering the Arisen immune to the Drake's wind flap attacks. 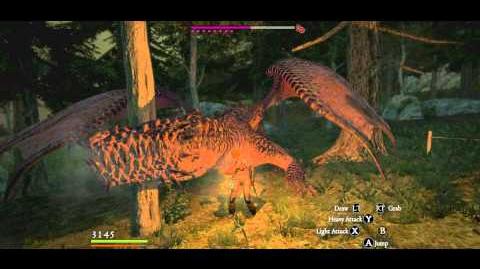 Solo Assassin with only Rusted Daggers vs Drake. Victory in 60 seconds. (A)
Equipping the Adhesion augment and inflicting Torpor with the Rusted Daggers make it harder for the Drake to dislodge the Arisen.
Retrieved from "https://dragonsdogma.fandom.com/wiki/Devilfire_Grove?oldid=312820"
Community content is available under CC-BY-SA unless otherwise noted.