Gransys
Deos Hills is a location in Dragon's Dogma.

Deos Hills is a forested region on the north side of the great river that divides it from Gran Soren and the Estan Plains. To the north is Northface Forest and to the west is the Cursewood. A small region south of the river near the Nameless Falls, and adjacent to the Wilted Forest is also part of the Deos Hills.

The hills are partially wooded, and partially open, and are crossed by a road from the west, ultimately from The Greatwall, leading to Conquest Road and Windbluff Tower to the east. A large bridge gives access to the south from the Hills.

There is a Healing Spring within the hills, an abandoned encampment known as the Old Garrison, as well as the main entrance to The Catacombs with a Riftstone next to it.

It is home to a considerable Deer and Boar population in the forested area. Near the river, several large basks of Sulfur Saurians have made their home. In the western parts near the spring may be found Goblins and a Cyclops. Heading further west along the road, at the border of the Cursewood can often be seen a small group of Westron Labrys Bandits with a group of Direwolves. This group will appear randomly after obtaining the Wyrm Hunt License. At night single Specter, Phantoms and Skeletons appear as well as a single band of Salvation Members; and a Wight near the border with the Cursewood, close to the northern riverbank.

After the defeat of the Dragon (Post-Game) and the quest Fathom Deep a Wyvern begins stalking the sky above the road just southwest of Windbluff Tower.

Occasionally Bandits may stage an ambush on the roads, and there are also rare possibilities for Ambush! quests including a Golem on the road leading west through this area; as well as a second Wight (after Honor and Treachery) in the woods north of the road and east of the healing spring; and a Chimera someway along Conquest Road.

"This leads down into the catacombs."

"I hear aught moving about the wood..."

"Roots of this sort of tree oft yield useful herbs and other plants."

"Nature is unbridled here. 'Tis quite a pleasant corner."

"What a large tree."

"The water may be home to hidden threats."

"Seems it's been awhile since anyone has called this place home." 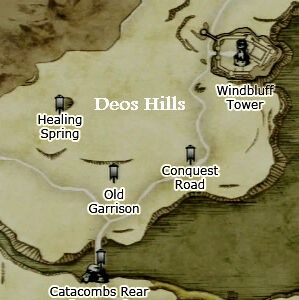 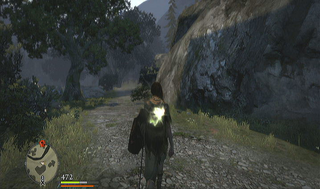 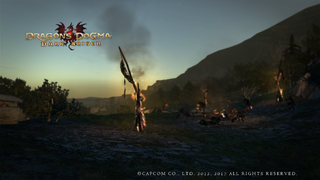 Goblin party at Deos Hills
Add a photo to this gallery
Retrieved from "https://dragonsdogma.fandom.com/wiki/Deos_Hills?oldid=319232"
Community content is available under CC-BY-SA unless otherwise noted.