Demonswrath is a dark based skill available in Dragon's Dogma.

"An advanced form of Demonspite that converts damage sustained while blocking into more powerful bolts of magick."

Demonspite and Demonswrath convert blocked attacks into a magickal charge on the shield, which can be released for a dark magick blast once fully charged.

This spell must be fully charged for it to have its proper effect, otherwise the spell is discharged quite weakly. After a few minutes an unreleased spell will disperse, losing all the stored power.

This spell seems unique in that, once cast, magick shields with innate elemental enchantments can utilize that element when perfect blocking - e.g. the Thunder Kite Shield can cause thundershock when enchanted with the shield spell.

When fully charged, the magick shield will swirl in darkness and make a loud whirling noise. Re-cast the spell again to discharge it.

When activated, the Arisen will extend their arms to each side and release the spell. There spell discharge consists of several parts, in quick succession :

The spell is purely magickal and has no physical component - it is well boosted by items such as Demon's Periapt. The power of the primary weapon (ie sword or mace) has no effect on damage.

The overall range of effect is similar to the icy blast from High Frazil but narrower. Multiple enemies can be damaged by the spell. More specifically it will strike through large foes, hitting them multiple times. 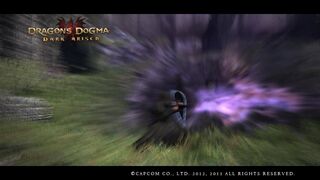 Fire!
Add a photo to this gallery
Retrieved from "https://dragonsdogma.fandom.com/wiki/Demonswrath?oldid=319602"
Community content is available under CC-BY-SA unless otherwise noted.