Deeper Trouble is a quest available in Dragon's Dogma.

"The villagers yet fear the well. Root out the remaining monster nests to end the threat for good and all."

Explore the well a second time, and finish the infestation at its root.

Seven in-game days after completing Deep Trouble, a plea for help can be heard emanating from the Cassardis well.

Inside the well is Rorric, asking for the elimination of the Saurian nest within Dripstone Cave. He'll also offer Throwblasts which will be useful later.

Proceed to the Emperor's Pillar chamber, and then to a western passage previously blocked by a large boulder.

After dispatching the Saurian, ensure the party is healed before destroying the egg clusters on the walls - all forms of fire are useful against the eggs, including Rorric's throwblasts. Continued attacks within the eggchamber will summon a Giant Saurian and several regular saurians.

Kill all forms of Saurian life within the chamber and report to Rorric at the well entrance to claim your reward. 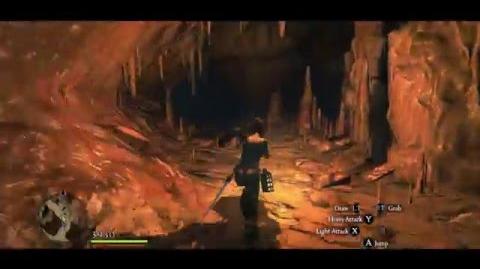 "Burn the nest with a Throwblast!"
"Destroying the eggs will draw out the largest saurians."
"Saurian eggs are quick to burn."
"So many eggs..."

Retrieved from "https://dragonsdogma.fandom.com/wiki/Deeper_Trouble?oldid=315830"
Community content is available under CC-BY-SA unless otherwise noted.