Dazzle Blast is a skill available in Dragon's Dogma.

"An advanced form of Dazzle Hold that tosses an explosive crafted to stun foes within a broader radius."

An advanced version of Dazzle Hold with a large firework display,

In addition to stunning or staggering enemies, this skill can inflict debilitations and damage based on the properties of the equipped daggers.

The area stun effect does not do damage or inflict debilitations. 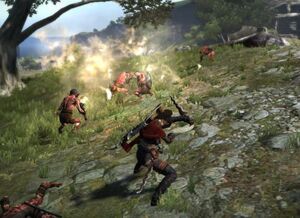 Add a photo to this gallery
Retrieved from "https://dragonsdogma.fandom.com/wiki/Dazzle_Blast?oldid=316930"
Community content is available under CC-BY-SA unless otherwise noted.