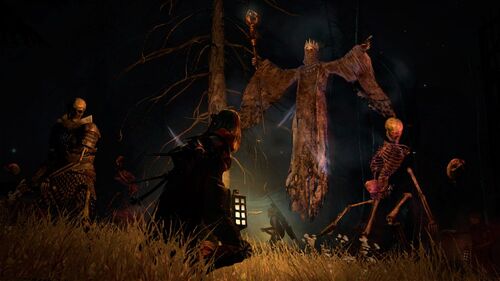 "Let the fire burn, or the darkness consume you."

Night is part of the regular progression of time following the day, in Dragon's Dogma, night causes different creatures to become active, and requires the use of a Lantern or other light source to see clearly. During night the game takes on a survival-horror approach akin to Capcom's Resident Evil  series. Enemies are more common and dangerous during this time, and one certainly wouldn't want a Drake fight in the middle of it all.

The world of Gransys has a traditional day-night cycle - the sun rises in the northeast, and rises through the sky through the day, setting somewhere in the west around two thirds of a day later - the remainder of the time can be considered night - there is no moon, so only the stars, lanterns, and other minor light sources provide illumintation.

One must have a grasp of time in order to avoid the night, so going to Inns to rest is always a good idea as you'll always start during the morning the next day. A full day-night cycle lasts for approximately forty-eight real-world minutes.

The stars in Gransys are generally only visible at night, or near to dusk and dawn. The stars trace a circular path in the sky - centered on a point roughly 45 degrees above the horizon in the north. Of the different constellations one stands out - a small but noticeable cluster that rises above the horizon. Once the cluster have risen 20 degrees into the night sky, dawn is imminent.

Some items can only be found at night. Moonglow flowers grow by the moonlight, generally close to water, and cannot be gathered or found at all during the day.

Many monsters only appear at night, or in dark places such as underground caverns and dungeons - Ghosts, Skeletons and other Undead only appear above ground during the night. The more powerful enemies appearing at night include Wights and Ogres

Bandits tend to return to a camp or building during the night, such as the Mountain Cottage, whilst other humanoids like Goblins become more bold, taking to the roads in ambush parties. Wolves are also emboldened at night.

The people of Gransys generally lock their houses at night, with themselves inside - if the Arisen stays inside a person's home 'til after dark the door will be locked, though they can still exit from inside, they will not be able to enter again until day. Pawns light their lanterns at the beginning of night, and put them away at the end.

Some fish pools contain more larger or giant fish by night, and bundles of wood have been known to have had gold or jewels cached in them at night; Weapon Piles and other gather spots may also differ by night - including one at the Nameless Falls, as well as graves in the courtyard of The Greatwall.

The flowers Sunbright, Grandblossom, Thornflower, and White Orchid only flower during the day. People leave their houses, and mill about, and travelers fill the safer roads.

Bandits may leave their camp and roam the open roads during the day. Similarly, Griffins hunt by day. If you don't kill it before sunset, it will fly back to its nest.

As Gransys occupies the eastern part of the Liogran Peninsula sunrise is usually visible over the sea's horizon to the east. Sunset however is never fully seen as the mountains that divide the peninsular obsure its setting.

There is no numbered measure of time to be found in Gransys - no clocks.

The Village Chapel in Cassardis and Gran Soren Cathedral both have bells that toll twice a day - at a third of a whole day after sunrise (at 'noon'), and again a quarter of a day after that (at 'dusk') -each time the bells ring ten times. Darkness comes not long after the second tolling.

Numerous things are dependent or affected by the passage of time : Perishable items decay after a few days; Forgerys take around a day to be made; and some quests run to a schedule - notably Trial and Tribulations, however most 'time sensitive' quests are dependent on the occurrence of other quest events, not the absolute passage of time.

It is possible to estimate the time of day by the position of the sun's shadow, or by the position of the stars in the sky. The sun rises just to the north of due east, and sets in the west - sunrise and sunset correspond to approximately 6am and 6pm - thus the direction of shadows as they change from pointing roughly west to east can be used to infer the time of day.

One way to do this is to face south, and then look at your Arisen's shadow. Its position is like that of a sundial - the shadow moves twice as fast as would the hour hand on a 12 hour clock. Straight to the right (west) is approximately 6am, back (north) is 12pm, to the left (east) is 6pm - the sun is not directly overhead at noon - it is slightly to the south.

The stars also rotate in the sky with the day-night cycle, suggesting they are fixed in the sky and the world rotates (or vice-versa) - the axis of rotation runs due north above the horizon, to due south below the horizon. With skill the stars might also be used to tell the time.

It seems that whilst in The Everfall (including its chambers such as the Chamber of Lament) time in the outside world of Gransys does not pass at all.

On Bitterblack Isle, it often appears to be night, as lit by moonlight, though the normal day-night cycle continues in the background - external time runs queerly on Bitterblack Isle - and things affected by it such as Bloodlust may seem random or erratic - Bloodlust is not permanent on the Isle, nor does it activate due to darkness. Resting at Resting Benchs on Bitterblack does not advance Gransys time by any significant amount.

The Lantern is the standard source of light. The arisen's Lantern casts the greatest radius of light - pawn's lanterns only cast a small glow. In general the lantern is essential adventuring equipment. There are numerous other ways to bring light to the darkness - a lit piece of kindling provides good light. The spell Magickal Flare provides intense holy illumination - other spells and explosions will provide temporary lighting also.

In the wider world, there are numerous fires, torches, and braziers that illuminate.

Retrieved from "https://dragonsdogma.fandom.com/wiki/Day_and_Night_cycle?oldid=309336"
Community content is available under CC-BY-SA unless otherwise noted.