There are two types of damage in the game, physical and magickal. The two damage types never combine; they are separately and respectively applied and then defended in turn by the imposition of the character's or enemy's Defense (DEF) or Magick Defense (MDEF) stat.

The physical and magickal attack and defense stats of the Arisen and Pawns are viewable in the "status" screen from the 'Pause Menu.' The values shown incorporate the base value, plus modifiers from augments; a second higher value shows the value after weapons or armors are factored, which is the loadout amount. The numerical effects of Invigorations or Debilitations are not shown numerically; however, if present, the relevant Status Effects is registered in the individual's "Condition" sub-menu.

Attacks by the Arisen and allies on foes are calculated differently from those made by foe on the party - for attacks on foes defense is subtracted from attack power; for foe attacks on the party their attack power is divided by a function of the ally's defense - with core defense counting twice as much as that coming from armor and other equipment.

Once the attack has been mitigated by defense by either method the resultant damage is subtracted from health - once health reaches zero creatures die, and pawns become Unconscious.

For physical attacks with enchanted weapons only the magic of the weapon matters, not the wielder's core magick.

Such skills and spells include the Mystic Knight's Magick Cannon, and Perilous Sigil.  These scale only with weapon strength, and not core strength; however, some spell enchanted perfect blocks have an initial shockwave that scales with all magick and all strength.

Sorcerers have a few spells with a physical component that also scales with total strength including core strength (e.g., Gicel). Mages have no spells that do physical damage. Of Magick Archer's non-melee skills only Immolation does physical damage.

When a foes defense exceeds attack power no damage is done at all ... thus at lower levels or when facing strong foes a more powerful attack may make the difference between no damage and good damage.

As well a chosing powerful skills and spells, other ways to boost attack power past defenses include magick and strength boosting augments; use of Invigorations that cause Strength Boosted or Magick Boosted, or weakening defense by inflicting debilitations like curse; grappling; and using an element to which the enemy is weak to.

Effects such as Blunt or Slash resistance; attacks to weakpoints; climbing boosts and stance or status effects such as attacks on frozen foes only modify final damage, and so don't help break through defenses.

The calculations used to obtain damage have been discovered with a good degree of reliability from testing. The formulas used are explained below.

A damage formula has been suggested which matches with real world data.

A = augment multiplier (eg 1.2x with Clout)
I = Buff multiplier (from Raised or Lowered Attributes on the attacker, plus the inverse effect of the same on the defenders)
G = Grapple power boost

For magick, the suggested formula is very similar, but differs slightly :

A = augment multiplier (eg 1.2x with Acuity)
I = Buff multiplier (from Raised or Lowered Attributes on the attacker, plus the inverse effect of the same on the defenders)
G = Grapple power boost
EW = enemy elemental weakness modifier

The outputs Damagephysical and Damagemag are the final damage numbers of the attack. This number is subtracted from enemy Health.

Some attacks damage in separate stages. For example, Ingle is calculated in two steps: the initial damage from the fireball strike, and then a second reduction from the small explosion after. This two stage effect can be seen in the Arisen's health gauge on screen.

A key difference between physical and magickal attacks is that with magick, elemental weaknesses can be exploited to "armor break" a foe, whilst with melee attacks blunt or slashing resistance only modify the final damage.

The effect of Iraklis is to modify both Skwep and Spwep to ~ one ninth of their proper values - when it criticals those multipliers are increased to nine times their proper values. Thus the power of weapon enchantments as well as equipment boosts are also affected by the longsword.

A completely different formula is used when calculating damage from attacks from foes and monsters on the Arisen and allies. It is thought to be :

The same equation is used separately for both magick and melee attacks, but with the creature's magick or physical power used, and the Arisen's or ally's Defense or Magick Defense interposed. Elemental or Bludgeoning or Piercing Resistances (or weaknesses) reduce (or increase) the foe's attack power by a percentage related to the resistance. 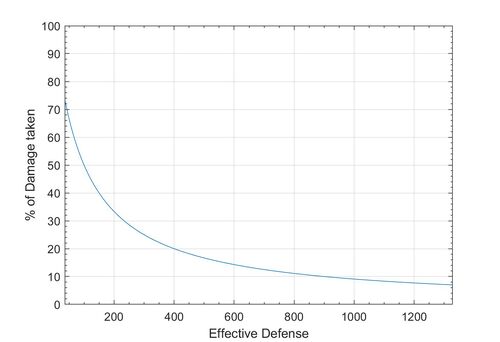 Damage on foes from the Arisen and allies decreases linearly to zero as defense increases; whilst damage to the Arisen from foes gradually tails off.

For a table of the multipliers and factors used in damage calculation, see Skill multiplier data.
For Creature defenses and physical and magickal resistances, see List of Creature Defenses and Resistances.

Retrieved from "https://dragonsdogma.fandom.com/wiki/Damage_Calculation?oldid=320067"
Community content is available under CC-BY-SA unless otherwise noted.