Slave to a broken order... dare you look upon the truth?
-Daimon's Awakened Form 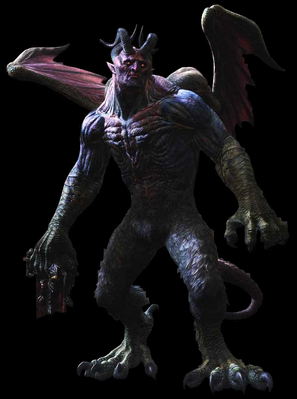 Daimon is an Arisen from an age long past, who refused the choice given to him by the Dragon. In return, the Dragon transformed him into this foul creature gone mad with despair at the loss of his most loved ones.

It is believed this evil entity was born out of the past Arisen's hatred towards the destiny imposed upon him. This monster nurtured from these ill thoughts for centuries, feeding itself from its host as well as the unfortunate Arisen who met their doom in this dungeon. The only thing he needed to be free was someone powerful enough to separate him from Daimon, allowing it to become an independent being. It is the reason why Bitterblack island is still covered in an ominous shroud and the stench of death continues to loom over the place.

Given the amount of corrupted thoughts it has consumed, it could be depicted as the embodiment of mankind's chaos; humanity's desire to end the infinite cycle.

Despite his size and bulk, Daimon is a powerful and agile fighter with potent spell casting and brute force. He will use tactics to lure the party into disarray, which makes him a tough opponent. He is generally highly resilient to both physical and magickal attacks; if one intends to deal noteworthy damage, they should target his head. Halfway through battle, Daimon will begin to alter his rhythm, casting deadly combinations of magic that may deal serious damage to both the Arisen and their Pawns. He performs his special move more than once during battle, and it can drastically change the course of the fight.

When first approached, The Fallen City carries an eerie quietness within its inner limits. As the Arisen travels through it, there is no threat; no possibility of an enemy attack. At the end of the city is a large door, behind it is a short corridor leading to the final battle with Daimon. Once the battle has commenced the Arisen can not leave or use a Liftstone to exit the battle arena. Only victory or defeat are options once the Bitterblack Sanctum is entered.

Once Daimon is defeated, many significant changes are made throughout Bitterblack Isle, including enemy spawns, spawn locations and loot from chests.

Note: if one enters Daimon's chamber, Bitterblack Sanctum, the Fallen City will become populated with enemies.

Upon entering the Sanctum after unlocking the whole of Bitterblack Isle, the voice of Daimon appears to be more ominous. As the battle continues for a second time, it appears as though the fight is identical to that of the first encounter, but once Daimon's hit points are depleted, a second form takes over and the fight renews.

Daimon's second form appears after resonating with the Arisen's scar. A head sprouts and takes form out of Daimon's torso. Its new head resembles that of The Dragon but its deformation has given it an eerily human shape. Barroch defines it as something grievous and dark which bears a stink worse than the dragon itself. In this Awakened Form, the battle becomes more profound. He is very resilient to magick and uses various magickal attacks of greater potency. 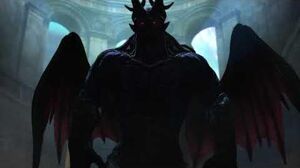 Dragon's Dogma The Deathly 2020 Challenge
Daimon is defeated by a solo Level 75 Ranger while only using Dire Arrow or Deathly Arrow on Hard Mode. 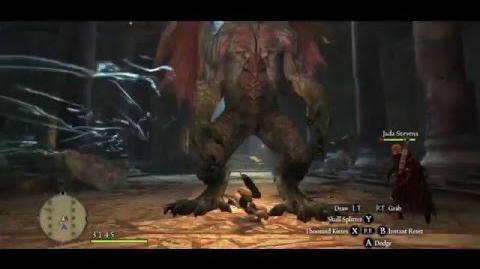 Strider vs Daimon. Victory in 69 seconds.
A Strider demonstrating climbing technique against Daimon. Torpor inflicted, with the subsequent use of a Liquid Vim, Salomet's Secrets and Tagilus's Miracles and with Thousand Kisses to attack 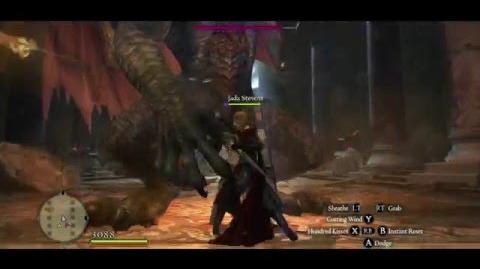 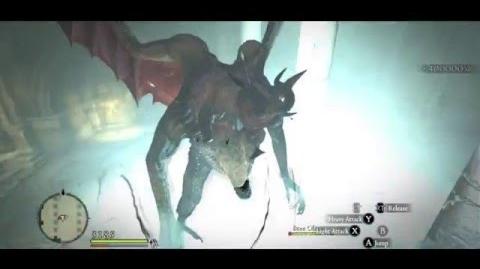 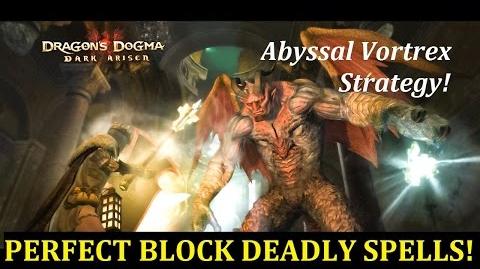 In addition to witnessing these techniques, it is necessary for Pawns to participate in killing Daimon 10 times either with their own Arisen or while travelling with others.

"Get swallowed up and it's all over!"
"Distance will not spare you from its claws!"
"A nightmare... 'Tis a nightmare made real..."
"Stand as far from that tear as you're able!"
"That portal it opens... Is that the Rift?!"
"'Tis a Rift, I'm certain! But how...?"
"Brute force and magick...and both well lethal!"
"The great head sprouting from its belly controls the rest!"
"Dragon's breath?!"
"'Tis not the same creature... I sense the dragon!"

For more details and sources, see Monument of Remembrance.

Daimon is in fact the cursed form of a former Arisen named Ashe - Ashe was a boy when his village was destroyed and was taken under the wing of an Arisen and pawn - Grette and Olra. Grette was a mother figure and mentor to the young orphaned Ashe.

Grette defeated a dragon, but fell to the Seneschal becoming a Dragon herself, and Olra returned to Ashe - later Ashe and Olra fell in love.

At some point Ashe too became an Arisen - in a cruel twist of fate the dragon he was tasked to slay - the one which had taken his heart was the former Grette. Grette as the dragon took Olra hostage as Ashe's beloved, giving him the choice - sacrifice Olra or slay her, the Dragon, the one he one loved as Grette.

Ashe cursed the whole world and the choice he was forced to make, rejecting everything - but the Dragon slew Olra, and cursed Ashe - he became Daimon - existing in a plane outside the common world - a place matching his own torment and despair.

In death the spirit of Olra entered another Arisen, and began to seek some form of redemption for Ashe - for all of them.. 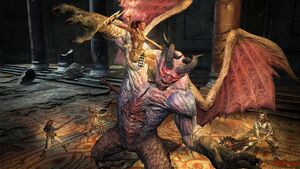 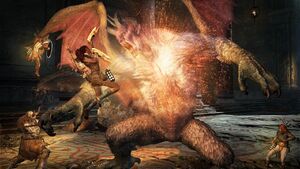 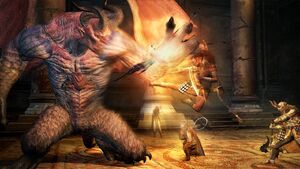 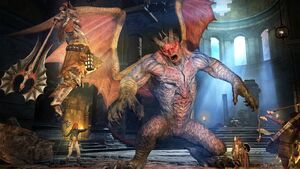