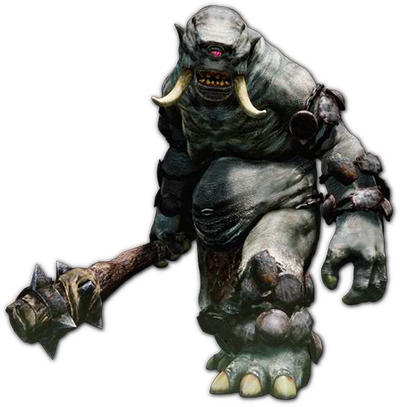 Cyclops is an enemy in Dragon's Dogma. It resembles a vaguely elephant-like humanoid, with a single eye, grey leathery skin, four fingers on each hand, and a pair of tusks. Many of them also wield primitive clubs.

" The cyclops is a one-eyed monster possessing a huge body and fearsome tusks. Fully grown cyclopes reach a height of twenty to twenty-five feet and, as a result of their large size they are prone to sloth and apathy. However, cyclopes can be inspired to ferocious action when they are angered, so act with caution in their presence.

Cyclopes’ preferred methods of attack are primitive and unsophisticated, but devastating in their sheer force. Mainly resorting to their natural brute strength, some individuals have also been seen to employ a club as a weapon.

Cyclopes are woefully unequipped when it comes to intelligence and that is why they are often found enslaved by humans or other creatures. The secret society Salvation is known to prefer using cyclopes in their attacks, thanks to the creatures’ resemblance to the group’s symbolic icon: the Remaining Eye.

They can be surprisingly docile and will quickly take a liking to any who provides them with sustenance—but if a cyclops is hungry or angered, you will see its true brutality.

The appetite of a cyclops is voracious and they have been known to capture and eat goblins. However, goblins have also managed to enslave many cyclopes by feeding them. They view the cyclopes as useful bodyguards, and the cyclopes see the goblins as convenient masters that keep them in food."
―Capcom official description[1]

Cyclopes appear with differing amounts of armor and equipment, from unarmored and with a single club, to fully armored with a helmet, and a fire club.  All Cyclopes will set their club on fire at night as a giant torch, which then causes burning as well as physical damage.

Occasionally a small Cyclops may be found with shorter tusks and lesser health.  This "pygmy" type has only been seen in The Watergod's Altar cavern below the Offering Chamber and on Bitterblack Isle in The Pilgrim's Gauntlet and The Bloodless Stockade (Post-Daimon).

Most but not all cyclops carry a club.  At night, this weapon is usually set alight. Any cyclops maybe temporarily disarmed, though they will eventually return to the club and pick it up again.

Head, Eye, and other parts

Only attacking the cyclops' head results in good damage.  Attacking the legs, arms, chest, or back usually only gives one fifth damage.

Direct hits on the eye double damage. However, if the eye takes enough damage, the cyclops will glare with rage, bending over and snorting angrily to its front, and glaring. After this glare the eye damage is reduced to one half (one quarter overall) for a time, roughly one to one-and-a-half minutes.

An armored cyclops still wearing it's helmet receives much less damage.  Removing the helmet is a key tactic. There are several ways to remove a Cyclops' helmet:

Though the eye is visible through a slit in the helmet, it is impossible to fire an arrow through the hole.

Armored cyclops also wear protective armor on their legs, arms and waist. Every piece of body armor can be destroyed once sufficient damage has been inflicted.

Debilitations may be inflicted even if the physical attack bounces off the Cyclops' armor.

In addition to witnessing these techniques, it is necessary for Pawns to participate in killing 50 Cyclopes either with their own Arisen or while traveling with others.

During battle, Pawns will repeatedly advise tactics known to be effective on that particular enemy and call instructions to their allies. They'll recite from their Bestiary which contains knowledge gained during their travels with the Arisen.

"Its eye is vulnerable!"
"I'll take its sight!"
"It has but one eye! Strike it!"
"I've a hold on it! Strike out the eye!"
"It is wroth! Now, strike the legs!"
"It cannot hold a weapon with an injured hand!"
"I'll get the eye afore it can shake me!"
"I'll see to that club!"
"I'll disarm it with a bolt of thunder!"
"An angered cyclops is more apt to fall."
"Snatch up any tusks you break free!"
"It pays no heed to its feet when enraged."
"Even a glancing blow is deadly!"
"Those tusks look hard as stone..." 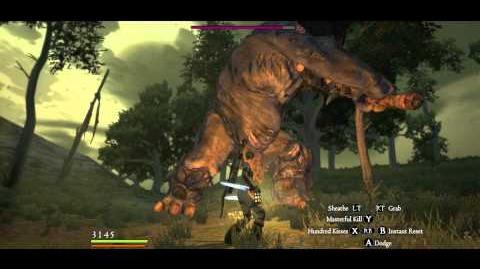 Demonstration of Galvanic Razors stunning a Cyclops (C)
A Strider demonstrating Torpor (in order to slow down the Cyclops) and Lightning effectiveness (in order to stun it and force it to drop its weapon). Used together, a Cyclops can be rendered virtually inert. 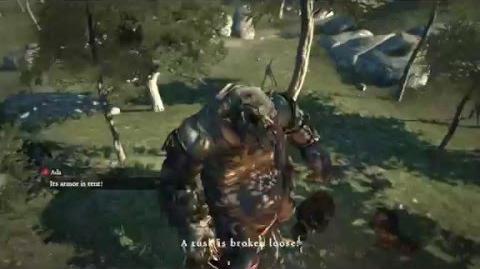 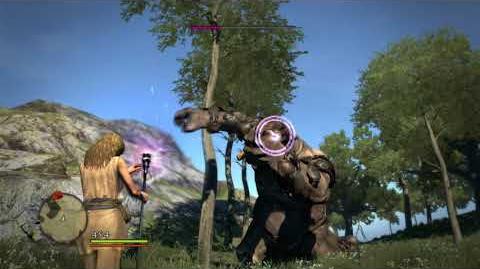 Dragon's Dogma - Proper Stripping of a Cyclops
How to remove Cyclops' armor just by making it fall in different manners.
Add a photo to this gallery 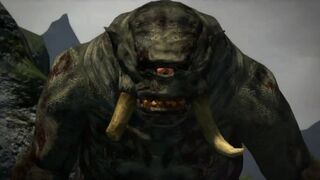 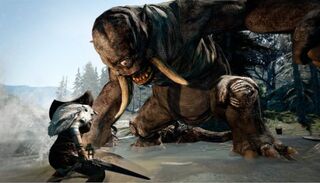 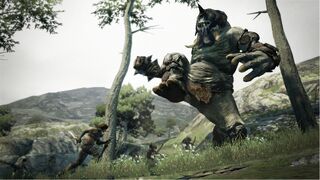 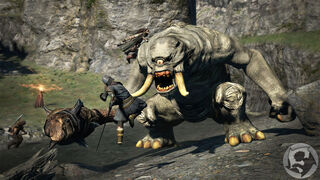 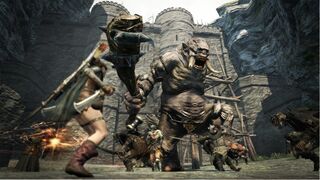 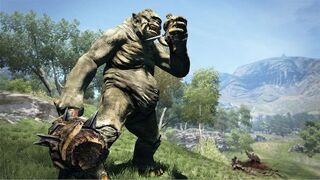 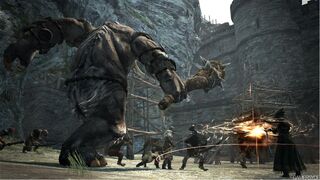 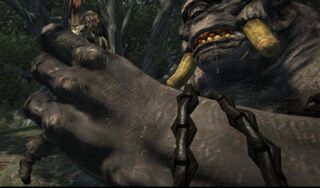 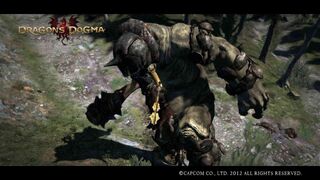 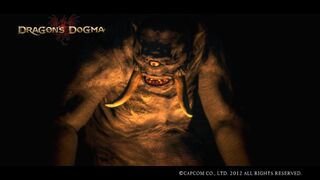 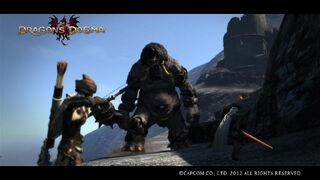 Retrieved from "https://dragonsdogma.fandom.com/wiki/Cyclops?oldid=322429"
Community content is available under CC-BY-SA unless otherwise noted.