Westron Labrys Bandits
Cursewood is a location in Dragon's Dogma.

The Cursewood is a forested region to the northwest of Gran Soren, lying on the northern side of the river opposite the Wilted Forest to the south and Deos Hills to the west. All travellers heading to The Ruins of Heavenspeak Fort and The Greatwall must pass through the Cursewood.

Two roads pass through and meet in the Cursewood - a north–south path fording the river coming from the Wilted Forest, and heads towards Heavenspeak; it meets an east west path from the Deos Hills at a junction in the centre of the forest. To the east of the northern path, as it rises towards the fort is the East Entrance to Soulflayer Canyon located in a gully off the main road.

The woods are home to female Westron Labrys Bandits, a Chimera, Wolves and a Cyclops. At night Skeleton Lords appear, as well as a Wight near the northern riverbank on the eastern fringe.

The part of the forest west of the main road is sparsely inhabited, but contains some Deer and male bandits both at a campsite in the north, and at the Beast Cave.

Reminishroom is common here. Apples may be found in limited quantities; and Grandgrapes grow on the northern bank of the river near the Prayer Falls.

"Talk is, a band of woman thieves makes their den in these parts."

"The grade is steep, Master. Mind you don't slip."

"Dead end... Though it seems a hold stands above us."

"Hmm, nothing to see for leagues."

"A tent... Abandoned by some traveler, perhaps."

"We're far from civilization yet."

"We may be able to glean material from the boulders of this wood."

"Whoever did this may still be near..." 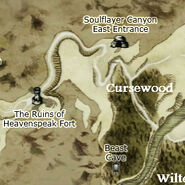 Add a photo to this gallery
Retrieved from "https://dragonsdogma.fandom.com/wiki/Cursewood?oldid=320313"
Community content is available under CC-BY-SA unless otherwise noted.