Corridor of the Hallowed

Corridor of the Hallowed is a location in Dragon's Dogma: Dark Arisen.

Corridor of the Hallowed is a small safe area on Bitterblack Isle. It has two entrances; one that leads from the Forsaken Cathedral and the other to Rotwood Depository. Through the gated area is yet another broken Riftstone that can be restored for 10,000 RC, as well as an exit atop the stairs that leads back to Bitterblack Isle Harbor.

Barroch may be found here, next to the small camp in the middle of the area. One of the slabs needed for the Request Board Quest, Echoes from the Beyond, can be found in the water at the end of the small pier.

Excluding Barroch, there are no large creatures or humans living here - there are however numerous Spiders and a colony of Leapworms.

A tablet containing a "Recollection of another Arisen" can be found here, as well as a Macabre Sculpture. 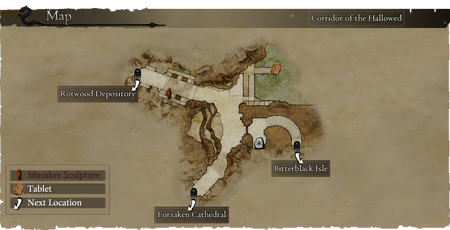 Retrieved from "https://dragonsdogma.fandom.com/wiki/Corridor_of_the_Hallowed?oldid=294414"
Community content is available under CC-BY-SA unless otherwise noted.