Conqueror's Sanctuary is a location in Dragon's Dogma.

An area within the Verda Woodlands located north of Bloodwater Beach and south-west of the Rest Camp in Devilfire Grove. A somewhat peculiar location, as it is inhabited by a good number of Goblins and Hobgoblins, two Cyclopes, and two cliffs each with a Ballista, initially often operated by Goblins.

One chest on the southeast side contains either : Padded Armor, or Frame Plate. There are also chests above on the higher ground where the Ballistas are - one nearby contains mostly minor healing items; another to the north may yield a Rose Ring.

The area is full of Goblins and Hobgoblins, including packs on the areas overlooking the hollow, some of whom will operate Ballistas. In addition there are two Cyclopes in the main hollow, on armored, on un-armored.

During Post-Game, all the Goblins and Cyclopes are replaced by a special version of a Drake that possesses more health than usual; it speaks English rather than Wyrmspeak.

"With practice, precision strikes and enchantments use will become routine."

"This land's seen many a clash 'tween man and monster o'er the years."

"Should you fall, 'twould be quite a climb back..." 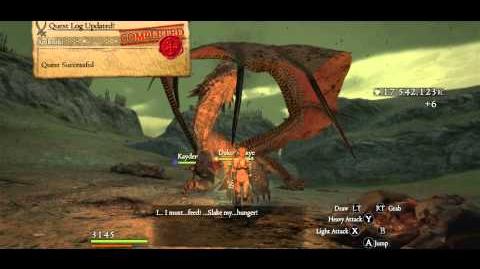 The "Special" Drake at the Conqueror's Sanctuary may speak English, but it retains the same vulnerabilities as its Latin speaking brethren. Slain here in 24 seconds with the party undamaged, no buffs or curatives, Hard mode. 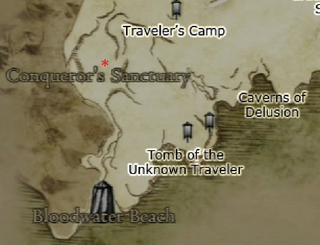 Area Map
Add a photo to this gallery
Retrieved from "https://dragonsdogma.fandom.com/wiki/Conqueror%27s_Sanctuary?oldid=310547"
Community content is available under CC-BY-SA unless otherwise noted.