Coin Purse of Charity is an item available in Dragon's Dogma.

"A coin purse said to help relieve one of material desires. It allows money to be used as a throwing weapon."

The Coin Purse of Charity can be used in battle to deal a large amount of Thrown Damage to a single enemy using ready cash as a weapon.

When thrown it uses up to 10,000 Gold in a single strike.  Damage scales directly with gold used, and minimally with strength; thus poorly endowed Arisen will not have much success with this thrown item.

One Coin Purse can deal over 20,000 damage against an Ox, and around half that against more substantially armored targets, making it the most powerful thrown weapon available to low level arisen. At very high strength (550+) Throwblast damage can begin to meet the Coin Purse in offensive power.

This can damage spectral enemies, usually immune to physical attack, including Living Armor and Ghosts. 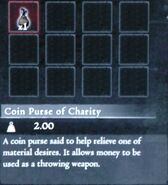 Add a photo to this gallery
Retrieved from "https://dragonsdogma.fandom.com/wiki/Coin_Purse_of_Charity?oldid=304725"
Community content is available under CC-BY-SA unless otherwise noted.