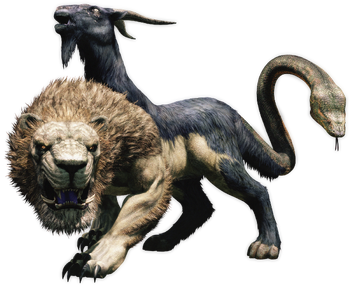 The Chimera is an enemy in Dragon's Dogma.

It is a large, three-headed creature composed of three animals: on the front is a lion's head, which is mostly a physical melee attacker, on its back is a goat's head, which casts long-range magick spells, and on its tail is a snake's head, which attacks enemies that engage in close combat or climb onto it.

It is similar to the Gorechimera, but has less health and cannot heal itself, making it easier to defeat.

" A fearsome beast bearing the heads of both a lion and a goat while its tail takes the form of a giant snake. The chimera’s features so distinguish it from the natural world that it is believed by most to be born not of God’s power but of the sorcerer’s arts.

The three beasts that reside within the creature each possess an independent will and this ability to act autonomously is frighteningly apparent if you come to blows with the chimera.

While the mobilization of its massive torso and legs is largely under the command of the lion head, the goat specializes in magickal attacks and the snake head on the chimera’s tail eliminates all blind spots and allows it to defend itself when downed. You would be foolish to approach a fallen chimera without caution if this snake is still able to fight.

On rare occasion, the chimera can be sent into a panic that will cause its respective personalities to fight for control of the body in a confused frenzy. Such behavior is not seen in other multi-headed beasts, such as the hydra, and so it appears yet another piece of evidence supporting the theory that the chimera is a man-made monster.

Chimeras are highly adaptive and can survive in any habitat, but they are most often observed in mountain shadows and deep in dungeons. They do not make a den or any other home for themselves as they are constantly on the prowl in search of new prey."
―Capcom official description [1] 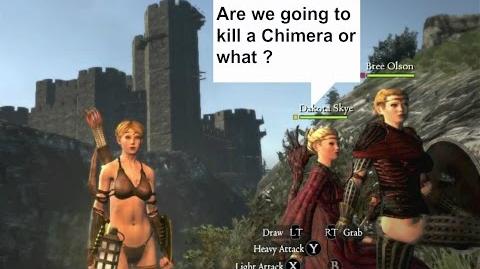 Chimera vulnerability demonstration
When inflicted with Torpor and Silence, a Chimera's attacks are slowed down considerably and is rendered unable to cast spells. (6 Masterful Kill counters, Hard mode) 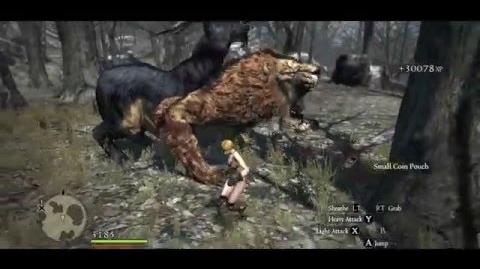 Chimera slaying tips (slain with only a White Hawk's Talon)
When outnumbered, eliminate the smaller enemies first and engage the biggest threat last. Use the terrain's natural obstacles to attack the Chimera from the rear and decapitate the Snake tail first. A Chimera is most dangerous from the front, so attack the Goat and Lion heads from the side or while mounting it. While ranged attacks are safer, melee attacks can more easily knock it down. (Hard mode)

In addition to witnessing these techniques, it may be necessary for Pawns to participate in killing 30 Chimeras either with their own Arisen or while travelling with others.

More information can be found at the Bestiary.

During battle, Pawns will repeatedly advise tactics known to be effective on that particular enemy and call instructions to their allies. They'll recite from their Bestiary which contains knowledge gained during their travels with the Arisen.

"We need but sever the tail!"
"The goat's bleating can lull a man to slumber!"
"The lion fears magick!"
"Slay the lion to cripple its physical attacks!"
"Watch for the goat's magick!"
"Hit the lion with magick while it's stopped!"
"Attack the goat's head!"
""Do not let it put you to sleep!"
"Destroy the lion's head and the beast becomes timid."
"Defeating the goat's head makes a chimera wild."
"Don't let fear keep you back!"

"The beast is panicked!" (when the creature rampages)
"The snake is done!"
"The goat is silenced!"
"The lion has fallen!" 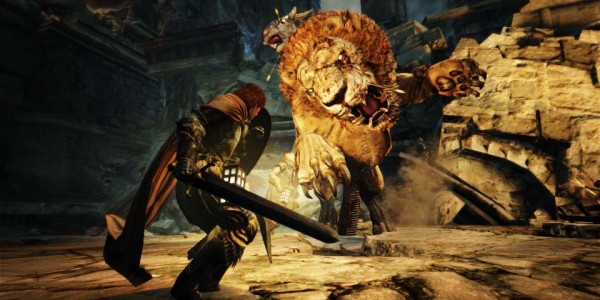 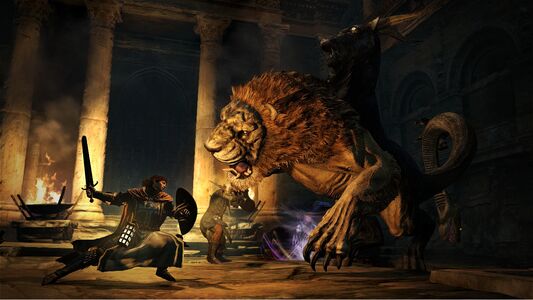 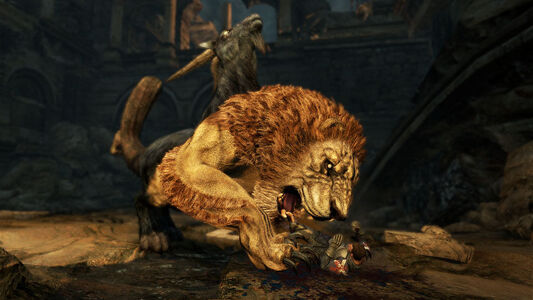 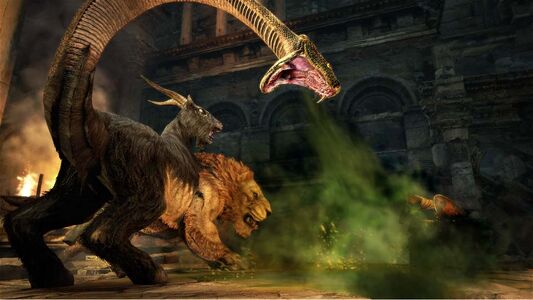 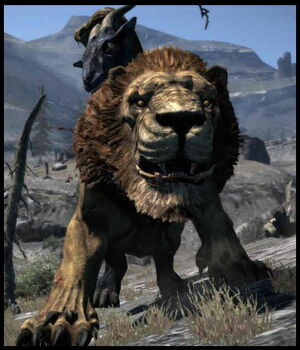 Retrieved from "https://dragonsdogma.fandom.com/wiki/Chimera?oldid=318213"
Community content is available under CC-BY-SA unless otherwise noted.