accepting Lure of the Abyss

Chasing Shadows is a quest available in Dragon's Dogma.

"Salvation reportedly has a spy inside the castle at Gran Soren. Mason asks you root out the cultist."

Shadow the mysterious figure, thought to be the 'Night's Champion'.

This quest becomes available after accepting the quest Lure of the Abyss. Speak to the mysterious figure known as  Mason to begin the quest. Mason can be found in Gran Soren either around the Fountain Square or resting in the Slums.

Once accepted, head towards the Noble Quarter at night.

Wait in front of the entrance gate to the Duke's Demesne, and near to Fournival Manor or the Knight's Manor. After a while the Arisen's view will be direced the player towards the Passage Gate entrance to the Noble Quarter.

Trail the suspicious person throughout Gran Soren. Remember not to get too close, otherwise the quest will fail.

Eventually, the man will lead the Arisen to the Abandoned House in the Venery and then an interaction between the man and Madeleine will take place.

Head back to Arsmith at the Arsmith's Alehouse to report what was witnessed.

Once completed Madeleine will open Madeleine's Shop in the Abandoned House. 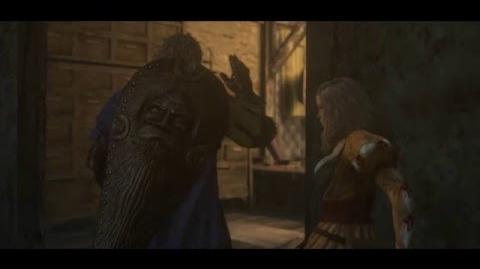 "Playing the shadow is more simple than you might think. Keep watch over who comes and goes from the castle, and follow them what seem suspicious. Simple, aye?"

"Those with aught to hide move about after nightfall. I would know. You'll learn the rest as you go, friend. Tell anything you learn to Arsmith."

Retrieved from "https://dragonsdogma.fandom.com/wiki/Chasing_Shadows?oldid=318002"
Community content is available under CC-BY-SA unless otherwise noted.