`Sinister armor plagued by an unknown curse. Some say it is not worn by any owner so much as it wears them...`

A jet black set of armor that borrows from design elements of various other pieces. It emits a constant black haze, and the helm glows pink from within.

The entire set is usable by fighters, warriors and mystick knights - the fully defended design, with enclosed helm and full metal hand covers, plus the low magic defense suggests the set is designed for warrior vocations.

This set is a mish-mash of different armors. The helmet is visually the same as the Chimeric Armet , the torso armor is similar to the design of an Abyssinal Coat combined with Gryphic Armor and the pauldrons (shoulder armor) are from the Steel Cuirass. The bracers are like Assailant's Bracers (or Assassin's Armguards with gloves), and the greaves are like the Gryphic Greaves (or Shadow Greaves with the foot piece of the Striker's Greaves or Iron Boots.)

The matching weapon for this set is Dragon's Flight. The Hero's Cape is also a strong stylistic match with complementary resistances.

The set can be worn with a Chain Mail Set of underclothes for a fairly good fit; however the matching design for the upper clothing is the Marshal's Bracers. An alternative to chainmail leg clothing are the Denim Hosen which match the deep blue purple of the design. 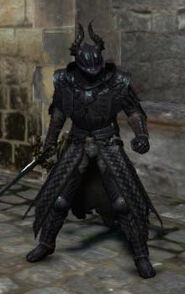 Add a photo to this gallery
Retrieved from "https://dragonsdogma.fandom.com/wiki/Chaos_Armor_Set?oldid=301874"
Community content is available under CC-BY-SA unless otherwise noted.