Chamberlain's Affidavit is an item available in Dragon's Dogma.

"A letter from a foreign official praising Fournival for his contributions to Gransys's economy."

A letter that portrays Fournival in a favorable light - as such it can be used as evidence in favor of Fournival during the quest Trial and Tribulations. It can be found on a sideboard located on the ground floor of Fournival Manor. 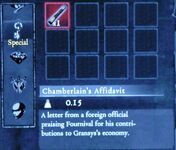 Retrieved from "https://dragonsdogma.fandom.com/wiki/Chamberlain%27s_Affidavit?oldid=289399"
Community content is available under CC-BY-SA unless otherwise noted.