Chamber of Estrangement is a location in Dragon's Dogma. One of the chambers in The Everfall. Is located under the Chamber of Distress.

The Chamber of Estrangement is a large Everfall area containing several rooms including a large circular arena.

The vendor Delec can be found here, and there are ten loot chests - for a list of possible rewards see List of Everfall Loot § Chamber of Estrangement

There are two possible groups of enemies in the arena - either a Golem + Cyclops + Ogre or a Metal Golem + Lich + Undead Warriors. With one group defeated, leaving and entering the arena will often cause the second group to appear.

In the other rooms of the chamber are found Undead, Undead Warriors, Giant Undead, and Specters

" 'Tis the fate of all pawns who lose their masters." 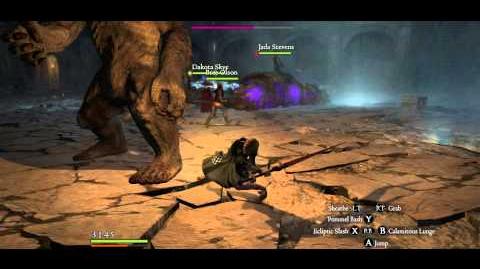 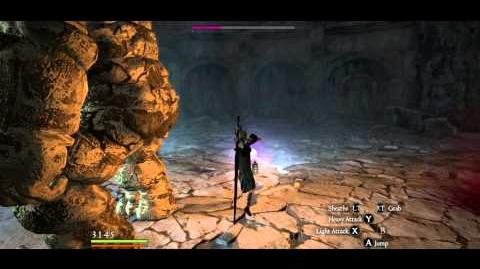 Boss group B Metal Golem Lich. Arisen undamaged, no buffs or curatives. Hard mode.
Players choosing the Fighter and Warrior vocations should hire bow-wielding pawns to destroy the floating discs high above the arena, which are unreachable by melee attacks.
Retrieved from "https://dragonsdogma.fandom.com/wiki/Chamber_of_Estrangement?oldid=314543"
Community content is available under CC-BY-SA unless otherwise noted.