Cassardis is the hometown of the Arisen, and the town the Arisen's journey begins from. Cassardis was once autonomous, but became a vassal of Gran Soren during Chief Adaro's leadership in exchange for greater protection.[1]

"I have lived in Cassardis all my life. Legend says that long ago, a king rose and ended the warring that had gripped the peninsula. But today, there are few remnants left of the ancient kingdoms, and fewer still know we are the descendants of kings. Cassardis is looked upon as a simple fishing village under the rule of Gran Soren. The area might not be as exciting as it once was but we are fully self-sufficient and you won't find a better lobster dinner in all the land."
―Quina[2]

Cassardis is a small fishing village in the southeast of Gransys and the homeplace of the Arisen. The village consists of more than a dozen dwellings on the hillside around a sheltered bay. The entire village is surrounded by a protective wall, with a gate leading to Seabreeze Trail guarded by a Watchtower.

The gate leads to the nearest thing the village has to a village square. Here, a well is found that leads down to Dripstone Cave, the Barn, and the village store at Aestella's and Benita's House. Pablos' Inn also faces the 'square'. There is also a Riftstone here.

From the square, a path leads north to Chief Adaro's House, and south ultimately to the Village Chapel.

The path to the chapel passes through the main part of the village, splitting into two on the way uphill. From the square the buildings are: on the right - Benita's House, Heraldo's Grocery, a Fisherman's House on the right; and on the left Aestella's, Iola's House, a dwelling ruined by the Dragon, and lastly, two more Fisherman's Houses.

In the area between the two paths leading uphill to the chapel are two further Fisherman's Houses, dwellings of Merin and Valmiro. The side route leads past an entrance alley to Inez's Alehouse and to the steps up to the chapel, with a second smaller well at the base of the steps.

The Village Chapel is outside the village's walls, now ruined in this part, and has several graves in its grounds.

The village faces the open ocean, with a sandy beach leading down to the sea. The Village Pier juts out into the sea and is the starting place for the quests of Dark Arisen. To the east, Starfall Bay can be reached by a rock tunnel - in New Game Plus, a special Riftstone will appear here, giving access to the Chamber of Lament and the Ur-Dragon.

Much of the roof tops of the village are traversable, accessed by climbing and jumping. Cassardite may be found in the chimneys of Cassardis and can be gathered from a tombstone in the small cave below Chief Adaro's House as well.

Several places in Cassardis are inaccessible: The gatehouse on the path to the chief's house, the rooms above Valmiro's dwellings, a large hall like building adjacent to the Village Chapel, and several structures along the village walls.

Villagers mill about Cassardis on their business during the day - at night (signaled by striking of the church bell) many will return to their homes. After dark, doors are locked, shops close, and most dwellings may not be entered. Exceptions are the Inn and Alehouse.

In Dark Arisen, Olra appears on the Village Pier after completion of the quest A Rude Awakening and upon exiting The Encampment. She can be found at night and will ferry the Arisen to and also back from Bitterblack Isle.

A wide variety of useful materials can be found in gathering spots, crates, boxes:

In Dragon's Dogma the useful Airtight Flasks can be bought here, in Dark Arisen one can be found outside Iola's Shop and another on the beach.

"The life of a salesman surely has its own trials."

"Dried fish are a local staple."

"Do you suppose this dried fish keeps long?"

"Seems these rooms are frequented by peddlers and the like."

"Are your travel prepartions complete?"

"Why not avail yourself of the inn to rest awhile, Arisen?"

"The sea appears calm, at least."

"Many boats, just as you'd expect for a fishing vilage."

"Remeber to both buy and sell items regularly."

"It seems this place deals in arms and general supplies. "

"Appears this grocer is responsible for much of the village's provisions."

"A lovely chapel, served by a dedicated priest, from what they say."

"Seems they trade in textiles, though I'm not certain they're open..."

Note: half of villagers will only appear once Off With Its Head quest is completed.

The main questline starts in Cassardis with Harbinger of Destruction and continues with Newly Arisen and Upon a Pawn.

The quest An Innocent Man starts here, as does Madeleine's questline with the escort quest Guard Duty. Several creature elimination quests are also available from the Inn's board.

Most Cassardians have escort quests. These are available from the Notice Board in Pablos' Inn.

Additionally the following people also start their escort quests at the board in Cassardis: Alon, Fournival, Sofiah, and Symone. Despite ending up in Cassardis Tomlin and Ansell have escort quests starting in Gran Soren. 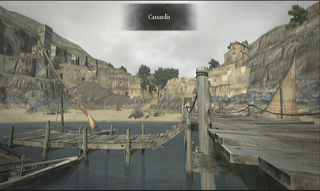 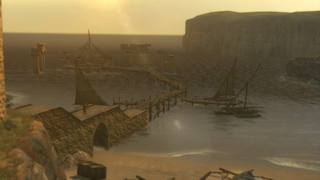 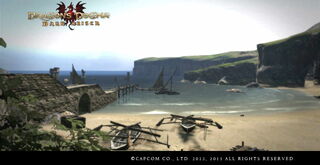 Retrieved from "https://dragonsdogma.fandom.com/wiki/Cassardis?oldid=316685"
Community content is available under CC-BY-SA unless otherwise noted.