Cape Pactforge is a location in Dragon's Dogma.

Cape Pactforge is located on Gransys' coast South-East of Gran Soren's south gate, in the eastern part of the Estan Plains - to the North of it a minor stream leads down to the sea under the main gate's entrance. A large group of Oxen can be found grazing nearby.

There is a small rock island just off the coast in front of the cape - on the island can be found a Treasure Chest and an Armor Pile. Reaching the island can be difficult to do without being taken by the Brine, and may require the use of Double Vault or Levitate.

For Loot here and in the wider area, see Estan Plains.

The Chest may contain a Leather Protector, Rose Ring, or Common Archistaff; as well as a Giant Coin Pouch.

The cape is a destination for several Escort Quests. For routes and guidance, see Escort Quest Walkthroughs. 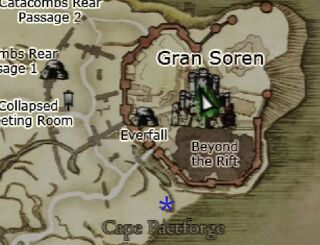 Area Map
Add a photo to this gallery
Retrieved from "https://dragonsdogma.fandom.com/wiki/Cape_Pactforge?oldid=312546"
Community content is available under CC-BY-SA unless otherwise noted.