Call of the Arisen

voice from the Rift

Call of the Arisen is a quest available in Dragon's Dogma.

Well met Arisen. Can you hear our voice ?

"A mysterious voice called when you arrived at the encampment. Perhaps it is your destiny that beckons..."

Investigate the mysterious voice, and answer its call.

This quest becomes available as soon as the Arisen enters The Encampment - a mysterious voice speaks and asks the Arisen to face a trial. 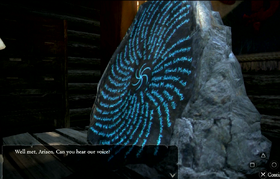 The quest requires the Arisen to seek out the Riftstone inside the Command Headquarters in The Encampment.

Follow the path upwards to the central area of the Encampment. There is a large tent with Mercedes standing in front of, and inside is Ecbal.

Head inside the tent and speak to the mysterious voice by examining the Riftstone.

Once the voice has spoken to the Arisen, head down the path and a cutscene will trigger with soldiers running towards the northern gate.

Follow them and exit the Encampment through the northern gate and prepare for battle.

Drive off the Threat

Once outside, there will be a Cyclops attack on the soldiers along with several Goblins.

The Cyclops isn't very considerate of its allies and can dispatch them, so use that as an advantage. With the help of Rook and the soldiers, the creature is soon dispatched - the Cyclops is already worn down and has only a sliver of Health left. Make sure to pick up any items the creatures may have dropped.

Report to the Rift

Once the Cyclops has been defeated, return to the Encampment and report back to the Riftstone in the central tent.

Upon talking with the Riftstone, the Main Pawn creation will start (see also Character Editor).

Afterwards, a cutscene will trigger and the quest is completed.

"The Beast comes. Hurry!" - Ser Publius
"You must hold it! Just a while longer!" - Ser Caraway, during the battle 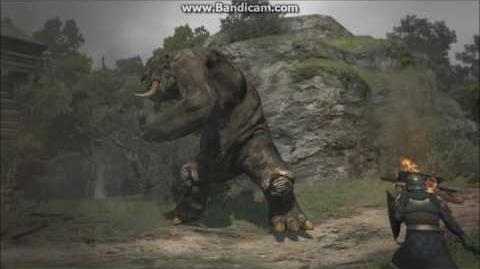 Dragon's Dogma Dark Arisen Call of the Arisen
Walkthrough
Add a photo to this gallery
Retrieved from "https://dragonsdogma.fandom.com/wiki/Call_of_the_Arisen?oldid=306624"
Community content is available under CC-BY-SA unless otherwise noted.