Bloodwater Beach is a location in Dragon's Dogma.

Bloodwater Beach is a small beach hidden in the far southwestern corner of Gransys, south of the Conqueror's Sanctuary. It is the destination of several Escort Quests and contains three Treasure Chests and two Fish pools in the shallow waters of the cove.

On the east side of the cliff overlooking the beach there is a rarely visited ledge which can be reached from the sea cliff (west along the cliff from the Tomb of the Unknown Traveler). On the ledge stands a chest that contains either a Giant Coin Pouch or a Seeker's Token.

Bloodwater Beach is the final destination of several escort quests:

For a route and guidance, see Escort Quest Walkthroughs.

For loot in the general area, see Verda Woodlands.

There are three chests located in the camp :

There are two Gather spots :

There is one Weapon/Armor Pile :

There are two Fish pools in the shallow waters, one at each end of the cove. They each have a good chance of yielding the useful Giant Fish, with the highest yield occurring when fishing at night.

"Quite the eccentric what set up camp out here..." 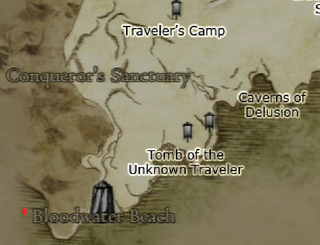 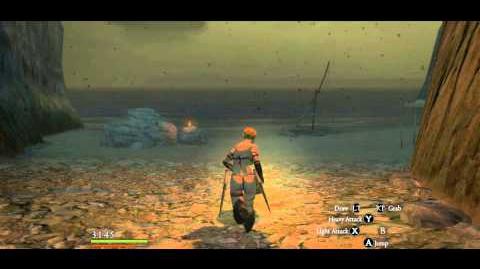 Bloodwater Beach can be easily located by walking from the Conqueror's Santuary, below the Noonflower spot.
Add a photo to this gallery
Retrieved from "https://dragonsdogma.fandom.com/wiki/Bloodwater_Beach?oldid=310657"
Community content is available under CC-BY-SA unless otherwise noted.