Barta Crags is a location in Dragon's Dogma.

"There are many stories of a time, hundreds of years ago, when the Barta Crags were lush, green, and full of life. But then, a dragon rained its fire down on the crags, reducing them to treacherous swampland. It is best to avoid this area altogether, but if you must venture through it, do so at night, for during the day the air is thick with miasma, a poisonous gas guaranteed to cut your adventure, and your life, short."
―Ser Daerio.[1]

The main feature of the Crags is the Miasmic Haunt, a large poisonous lake. Northwest of the Haunt lies Ophis' Domain, a corral holding a tame Cyclops. The western entrance to Soulflayer Canyon is located southeast of the Greatwall.

No other humans inhabit the Crags, save the female Bandits found in Heavenspeak Fort, and the soldiers stationed a the Greatwall Encampment.

The Crags are inhabited by Goblins, Hobgoblins, Direwolves, and Snow Harpies.

The western shores of the Miasmic Haunt are home to Sulfur Saurians. On the path leading north out of Heavenspeak Fort, a Chimera (or Gorechimera in Post-Game) may be encountered.

For loot in The Ruins of Heavenspeak Fort see that article.

The main flora in the Crags are Mithridate and Cragwort. Pumpkins also grow relatively abundantly.

" 'Tis a land rife with spots where useful materials may hide"
"These woods see few visitors, hence all the monsters and rare materials" (in the woods west of Miasmic Haunt)
"Something preyed on this beast... This is no man's work." (by the skeleton on Chimera territory)
"This fog has us blind..."
"I reckon if we caught a harpy, it could ferry us across."
"Careful, ser. The marshes hamper our movement" (in the marsh)
"This stretch was once a river, ere it went dry." (Around dried riverlets between the poisonous pools) 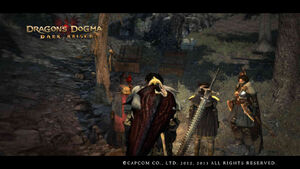 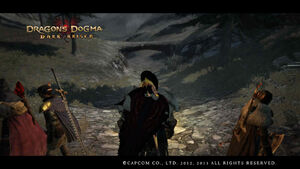 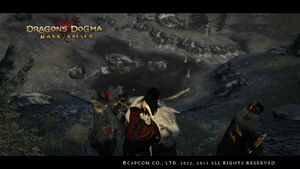 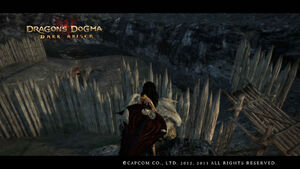 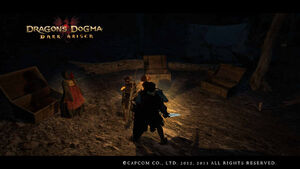 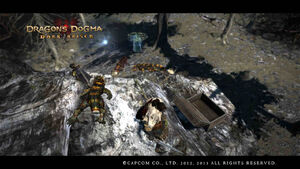 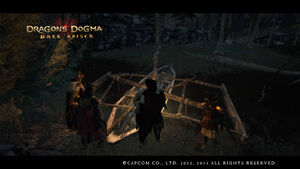 This boat acts as a bridge to get to the island 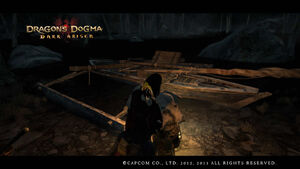 Boat with the Chest 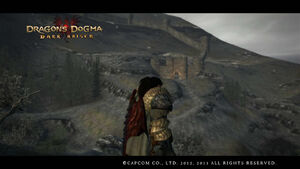 Scenic view to Heavenspeak Ruins
Add a photo to this gallery 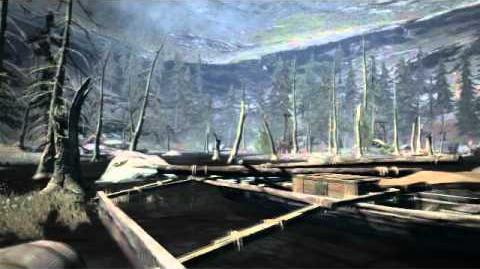 Barta Crags
Add a photo to this gallery

Retrieved from "https://dragonsdogma.fandom.com/wiki/Barta_Crags?oldid=300059"
Community content is available under CC-BY-SA unless otherwise noted.