Barnaby is an NPC in Dragon's Dogma.

Barnaby is the founder and keeper of the Pawn Guild, who is himself a Pawn. His duties include keeping a watchful eye on The Everfall and advising the Arisen if something should seem amiss.

Barnaby is first found in the Pawn Guild, and will remain there. Like other pawns whose Arisen died, he continues serving his master's wish after death - simply to aid other Arisen.

Though he provides little measurable aid to the Arisen, moreover requires their help in investigating the Everfall, his service is good enough surely, in keeping the Pawn Guild.

"As a pawn, Barnaby is not human. He does not age and cannot die, giving him little sense of life or vitality, and he never displays a strong will of his own. Long ago, Barnaby accompanied his Arisen and faced off with the dragon, but was defeated. Barnaby should have been dismissed back to beyond the rift, but his Arisen asked of him a promise: “Help those Arisen who follow after me...

And so he continued to accompany Arisen, even as he has watched them repeatedly fall to the might of the dragons. Eventually Barnaby developed relationships with mercenaries, also fighting for money on the front lines. At night he would drink with them, laughing and joking. For the emotionless Barnaby this was nothing more than an act, but they treated him as one of their own. This brought about a change in Barnaby. Defending a mercenary, he suffered a terrible wound. Time healed his wound, but he was never able to regain the whole of his former strength. Forced to accept the bitter truth that he was no longer capable of defeating a dragon, he dedicated himself to creating a place to raise pawns who could aid the Arisen in his place. It also offered pawns a place of rest, the rift-crossers who otherwise wandered aimlessly, despised and shunned by humans. He had created the Pawn Guild. Now Barnaby waits for the appearance of a new Arisen, one with the bravery and strength to defeat a dragon..."
―Barnaby's Tale[1] 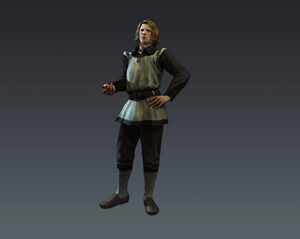 Retrieved from "https://dragonsdogma.fandom.com/wiki/Barnaby?oldid=314646"
Community content is available under CC-BY-SA unless otherwise noted.