`A range of different options for barbarian like fighters and warriors`

The sets and pieces are characterised by the use of leather, hide, and other animal skins and parts in their construction, as well as rugged or simple construction. The clothing is not finely tailored, but is made out of wrappings, un-cut pelts, with minimal stitching. An emphasis on animal features, skulls and other parts is also found. Iron is used, but only in the most vital of regions. Large golden badges are also popular.

The lowest level set consists of equipment available at a very early stage in the quest at Cassardis - the basic elements are the leather scale like mail, the Faded Vest, together with the Skull Belts.

The easily available items show a general resistance for fire, especially the leather items, and often have resistances to the common debilitations of poison, sleep or torpor.

The base barbarian equipment can be easily upgraded with the replacement of the faded with the Iron Vest, addition of the matching Horned Helm, plus the horned Iron Leg Guards. †

The Battle Greaves improve upon the leg guards. The exotic Dragonbeards can only be found beyond the rift, and improve the leg armor to the highest degree.

The basis of a 'full leather barbarian armor' are the matching Leather Cape, and Hide Armor. † The Brown Leathers are to the same design, all in simply stitched un-tailored hide. The Twisted Leathers add leather bandings to the Brown leather undergarments. The Steel-Toed Boots are a suitable match for the set, being of predominately un-glossed leather.

The chestguards are simple yet effective armored underclothing for the upper body that can be incorporated into a barbarian type armor - the basic form is the Leather Chestguard - the Hard Leather Plate is an improvement with additional leather bandings.

The Scale Armor Set forms the basis of an even more impressive barbarian armor than the heavy horned armor. In common with the horned sets the Iron Leg Guards are a good choice. The Feral Cape continues the overarching style. The addition of the Cyclops Veil to a barbarian's armor restricts use to only warrior or mystick knight vocations. †

A low cost and low protection version of this armor utilises the Leather Belts as chest armor. †

The Meloirean Cyclops Veil, and Direwolf Cape are upgrades or alternatives to their commoner versions. 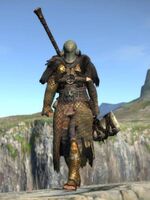 The Direwolf Veil or Lupine Veil are potential head wear. The Leather Waistwrap is an alternative to the Hide Armor. The Fur Greaves and Thick Fur Greaves are good options for colder climes - the thick fur greaves incorporate Chimera skin. The Over-Knee Boots and their variants make a good leg armor alternative.

Retrieved from "https://dragonsdogma.fandom.com/wiki/Barbarian_Armor_Sets?oldid=300266"
Community content is available under CC-BY-SA unless otherwise noted.