From A Different Sky - Part 10

Badge of Vows 94 is a Badge of Vows medal obtained during the From A Different Sky quest of the same number. The badge is the remnant of a former Riftstone, collecting it earns a reward of Rift Crystals.

In the original Dragon's Dogma, Badge of Vows 94 is obtained as part of the From A Different Sky - Part 10 DLC quest pack, in Dark Arisen, the quest is included in the base game.

Found on the cliff edges outside the walls of Windbluff Tower.

This badge may be reached by ascending the stairs then turning left as shown in Fig. 1. Climb the first available ladder and proceed to the point illustrated in Fig. 2. Look to the ledge below and drop down where the stone wall ends and provides an opening. As shown in Fig. 3, the badge will be on that narrow ledge in plain sight. 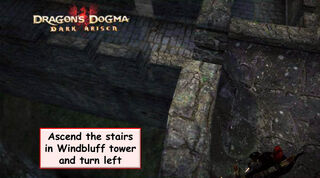 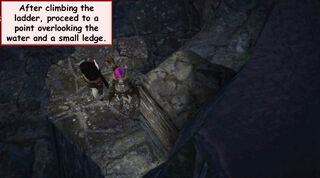 Fig. 2: Climb the first ladder and proceed to a point overlooking the water and a small ledge. 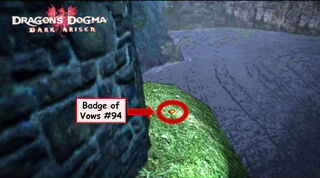 Fig. 3: Badge of Vows #94. (The badge has been enlarged and enhanced to better depict its location)

Alternatively the badge may be reached by traversing the ledges outside the tower on the north side - starting from the west gate and moving clockwise..

Retrieved from "https://dragonsdogma.fandom.com/wiki/Badge_of_Vows_94?oldid=281677"
Community content is available under CC-BY-SA unless otherwise noted.