From A Different Sky - Part 8

Badge of Vows 79 is a Badge of Vows medal obtained during the From A Different Sky quest of the same number. The badge is the remnant of a former Riftstone, collecting it earns a reward of Rift Crystals.

In the original Dragon's Dogma, Badge of Vows 79 is obtained as part of the From A Different Sky - Part 8 DLC quest pack, in Dark Arisen, the quest is included in the base game.

Found atop a southeastern corner tower on the battlements of The Ruins of Aernst Castle in the Vestad Hills region. The badge itself is hidden under a box.

Picking up this item completes the quest and grants a reward of 2 Rift Clusters and 1,000 experience. This item can be duplicated at The Black Cat for 18,750 Gold.

The tower is easily accessed - a stairway from the main area of the castle leads up to the battlement walkway. However the tower top is too high to reach using standard jumps, and requires some method of gaining additional height to reach it.

With Double Vault reaching the tower is easy. Jump from the main battlement walkway to the abutting wall to the west of the tower. From there double jump towards the lower right side of the tower, where the broken battlements are lowest. The pull oneself up.

Very small Arisen may have difficulty with the second jump.

Any spellcaster class with a frigor type spell can easily reach the block. Cast frigor on the walkway (or on the adjacent wall) to create a stepping stone of ice - the additional height provided by the frigor block makes the tower an easy jump to reach.

Pawns or other persons in the range of the frigor spell will prevent the block from forming. An additional complication is that sometimes a block will form, but not be climbable - if this occurs simply try again. 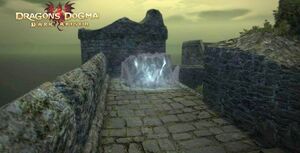 Frigor block on the main walkway. (Note - the broken wall on the near right offers an alternative long leviate jump to the tower) 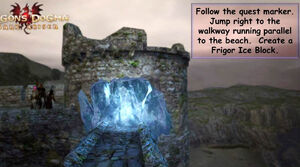 Spellcasters with the skill levitate (as well as vocations with "long jump" skills i.e. Mystick Knight's Sky Dance.) may obtain the upper area of the tower by taking a jump from the broken wall on the right (inner castle side) of the walkway.

With levitate the jump is difficult to time, but does not require a running start. 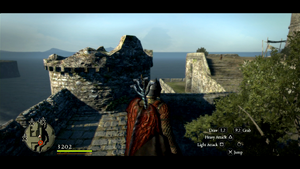 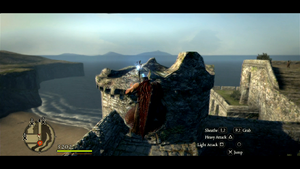 There a several Barrels within the castle - these can be placed against the wall to create "stepping stones" to the upper area.

For vocations with Double Vault or Levitate skills a single barrel will be enough. Shorter Fighter or Warrior Arisen may need to stack a second barrel to gain enough height (see Barrel for stacking tips) - explore the castle to find enough (three) barrels.

In general pawns will smash barrels, so release them first if attempting complicated barrel stacking. 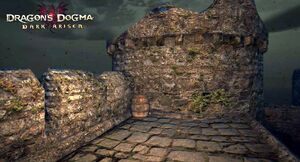 The strider skill Stepping Stone, used on a pawn, or object (box or barrel) transported to the corner tower, could be used to reach the badge.

With Sunflare one can double vault over the battlements on the east side, the follow up with Sunflare to land on the tower's main platform.

Retrieved from "https://dragonsdogma.fandom.com/wiki/Badge_of_Vows_79?oldid=309910"
Community content is available under CC-BY-SA unless otherwise noted.