From A Different Sky - Part 8

Badge of Vows 74 is a Badge of Vows medal obtained during the From A Different Sky quest of the same number. The badge is the remnant of a former Riftstone, collecting it earns a reward of Rift Crystals.

In the original Dragon's Dogma, Badge of Vows 74 is obtained as part of the From A Different Sky - Part 8 DLC quest pack, in Dark Arisen, the quest is included in the base game.

Found atop a rock formation on the western edge of Devilfire Grove.

Make for the rock at the edge of Devilfire Grove - the easiest way up the rock is via the lowest part at the right side - Arisen with Double Vault should easily be able to scale the rock.

Alternatives to Double Vault include Levitate or Frigor ice blocks. 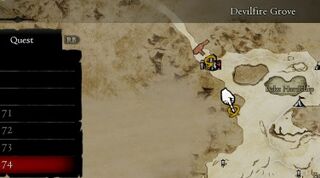 Once picked up the quest will successfully conclude.

Retrieved from "https://dragonsdogma.fandom.com/wiki/Badge_of_Vows_74?oldid=281654"
Community content is available under CC-BY-SA unless otherwise noted.