From A Different Sky - Part 7

Badge of Vows 64 is a quest item obtained during the From A Different Sky quest of the same number. The badge is the remnant of a former Riftstone, collecting it earns a reward of Rift Crystals.

In the original Dragon's Dogma, Badge of Vows 64 is obtained as part of the From A Different Sky - Part 7 DLC quest pack, in Dark Arisen, the quest is included in the base game.

Found in a rock cut cave in an inaccessible place high on Pastona Cavern's walls.

=Picking up this item grants a reward of 3 Rift Clusters and 1,000 experience. This item can be duplicated at The Black Cat for 18,750 Gold.

Travel northwest of Bandit's Den. From a cubby hole in the north side of the walls climb the stairs to access the ledges that the bandits use for sniping. The badge is located in a cavern on the opposite side of the canyon that is only accessible by a series of long jumps.

The easiest way to get to the badge is by using Levitate or Sky Rapture to cross the gaps, it is also possible to Double Vault with a running start. Even a warrior may reach the badge using running jumps if their encumbrance is not too high. 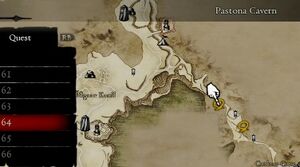 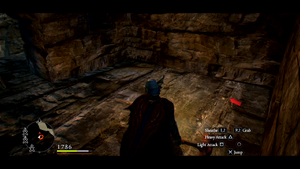 Enter the doorway depicted in Fig. 1 and climb several flights of stairs to the upper level. Exit onto a narrow ledge and turn right. There is a large gap to cross as shown in Fig. 2 -the ledge can be easily reached using Levitate, Double Vault or Sunflare - a standard jump with a running start can reach the ledges with a running start and good timing.

Once on the small outcrop, there are two options: The easiest and only way for warriors and fighters is to first vault directly across to the opposite ledge as shown in Fig. 2 as designated as Option A in Fig. 3, then followed by another jump to the platform outside the cave where the badge lies. Alternatively, Arisens will extended jumping skills can attempt to make one large leap across the canyon from the first ledge directly to the platform leading to the cave doorway as designated as Option B in Fig. 3.

As in Option A, once on the platform, the player will enter a doorway into a small chamber where Badge of Vows #64 can be found. 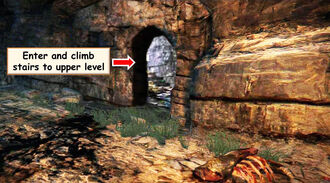 Fig 1: Enter the doorway in the side of the cliff and go up several flights of stairs exiting at the top. 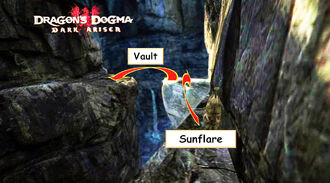 Fig. 2: Cross the long gap to a small overhang on the wall of the cliff. From there cross to the other side. Note that there are two options to cross as shown in Fig. 3. 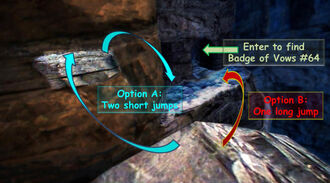 Fig. 3: Cross over to a platform with a doorway 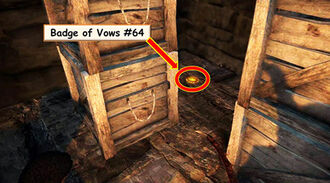 Badge of Vows #64 is in the corner between some breakable crates as shown in Fig 4. Pick it up to complete the quest.

Retrieved from "https://dragonsdogma.fandom.com/wiki/Badge_of_Vows_64?oldid=300408"
Community content is available under CC-BY-SA unless otherwise noted.