From A Different Sky - Part 7

Badge of Vows 61 is a Badge of Vows medal obtained during the From A Different Sky quest of the same number. The badge is the remnant of a former Riftstone, collecting it earns a reward of Rift Crystals.

In the original Dragon's Dogma, Badge of Vows 61 is obtained as part of the From A Different Sky - Part 7 DLC quest pack, in Dark Arisen, the quest is included in the base game.

Found in the Verda Woodlands, directly north of the Miner's Toolshed.

The badge sits on one of the mid-level cliffs on the northern edge of the Verda Woodlands. It rests near a Weapon/Armor Pile. It may be a little tricky to locate depending on the player's approach.

Though the badge is due north of the Miner's Toolshed it may not be accessible from that direction due to the height of the ledge - instead approach from the north and drop down the cliff.

Hop down to the ledge in order to obtain the badge and complete the quest. 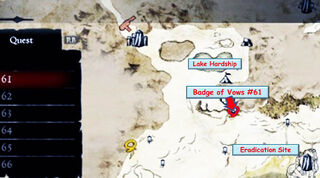 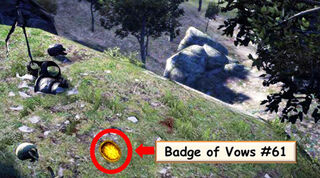 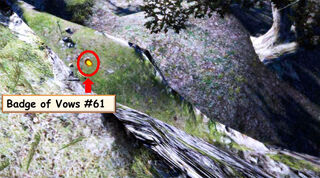 View of the badge and ledge from the cliff above (badge enlarged)
Retrieved from "https://dragonsdogma.fandom.com/wiki/Badge_of_Vows_61?oldid=281628"
Community content is available under CC-BY-SA unless otherwise noted.